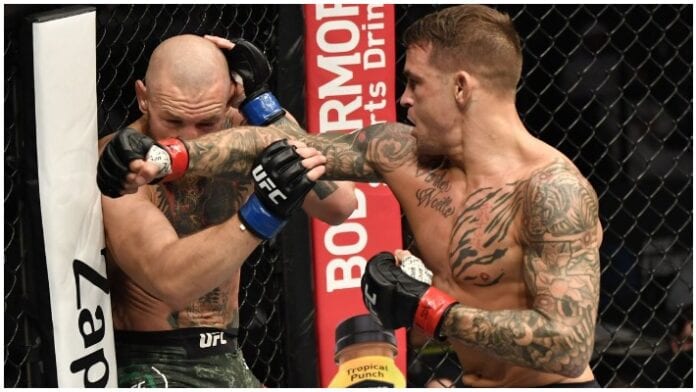 Calf kicks were a big part of the strategy for Dustin Poirier against Conor McGregor according to Thiago Alves.

Poirier enjoyed arguably the biggest win of his career after knocking McGregor out in the second round of their UFC 257 headliner last weekend.

A major factor in the fight were the calf kicks of Poirier which destabilized McGregor and ultimately led to him getting caught and eventually finished.

And former UFC welterweight title challenger and current American Top Team coach Thiago Alves — known for his brutal leg kicks back in the day — broke down the game plan in a recent interview.

“It was one of the strategies for this fight,” Alves told MMA Junkie. “Dustin is a complete fighter. We know that he can be superior in the standup, in the grappling, and in the wrestling, as well.

“So we came up with a good gameplan – me, Mike Brown and coach Dyah Davis, his boxing coach. The calf kicks, the leg kicks were definitely one of the weapons that Dustin was able to use, but we had a lot of ways to get the job done.

“… We know that it was a very good possibility, especially because of the way Conor McGregor stands, you know, that wide karate style with great boxing. But we know how much damage the calf kicks cause. It’s something that doesn’t just go away, and it just stays with you. It makes you slower. So it was definitely one of the weapons we knew Dustin could be successful with.”

McGregor notably claimed after the fight that his right leg was dead as he needed crutches to walk following the event. Alves knows full well the damage leg kicks can cause as he has dished out his own share of punishment to fighters over the years with his kicking.

And he explained just how bad it can get.

“Your whole leg is completely dead, and when you breathe, it hurts as well,” Alves added. “So it pretty much shoots a pain through out your whole leg and you’re not able to stand still. Every time when you put your foot on the ground, it’s super painful, so it’s very debilitating. It’s hard to move forward. It’s hard to impose your game plan.”

Perhaps more and more fighters will start to utilize leg kicks as part of their strategy.

What did you think of Poirier’s leg kicks against McGregor?