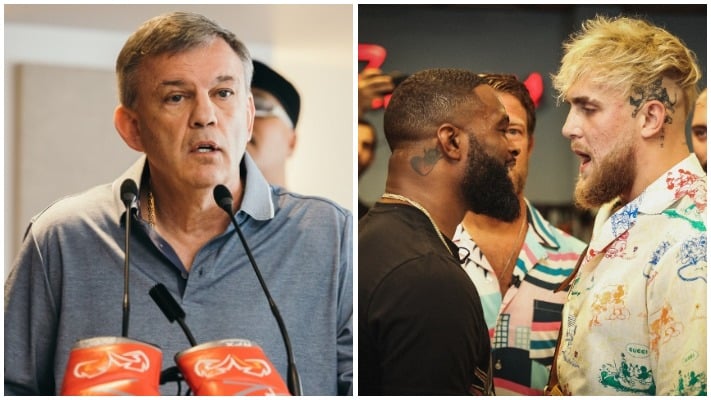 The YouTuber looks to keep his record perfect and improve to 4-0 this Sunday.

Atlas believes that Paul has the mental advantage against a “shot” fighter in Woodley.

“I like Woodley…he’s maybe the greatest Welterweight Champion of all time in the UFC. I mean, he’s that special.,” Atlas said on the latest episode of his podcast THE FIGHT with Teddy Atlas. “Woodley’s 39 years old, he lost his last 4 fights and lost them by KO and submission… he’s shot.”

That isn’t the only advantage Atlas believes Paul has over Woodley. The boxing pundit is also convinced that Paul has the physical advantage over a smaller Woodley as well.

Atlas explained that Woodley’s jab is what will be the downfall of him in the fight and allows Paul to time it easily and land that big right hand he possesses.

Atlas went on to compare Paul to Floyd Mayweather for how he picks his opponents in such a smart fashion. Atlas explained that Paul, “Picked this fight for a reason and because he can sell it.”

Paul, so far in his boxing career has fought a YouTuber, a retired NBA fighter, and an MMA fighter known for his wrestling.

Atlas admires the two fighters and even enjoys the spectacle that they will be putting on for viewers around the world.

“Sometimes it’s about capturing the people’s imagination and I know the imagination goes bonkers. It goes coo-coo, coo-coo for Cocoa Puffs.”

Do you agree with Teddy Atlas? Will Jake Paul KO Tyron Woodley on August 29?