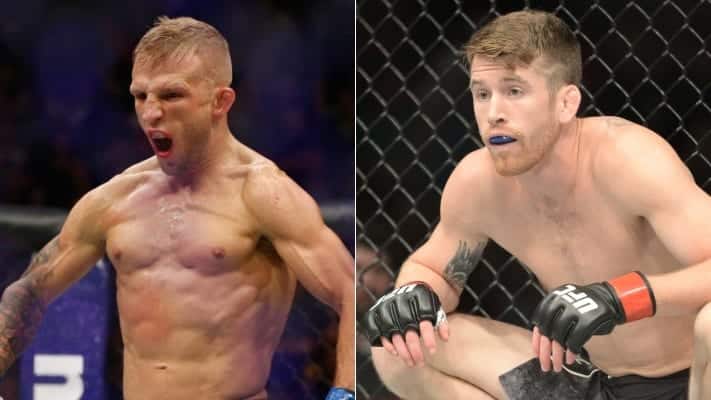 After a long layoff, former UFC bantamweight champion T.J. Dillashaw will make his return to the octagon against Cory Sandhagen on July 24th in a UFC Fight Night main event.

This comes after the matchup between the two top bantamweight contenders was removed from the UFC Vegas 26 card after Dillashaw suffered a nasty cut above his eye while preparing for the bout in camp. A women’s flyweight matchup between Michelle Waterson and Marina Rodriguez was the substitute main event for Dillashaw vs. Sandhagen.

This news was first reported by MMA Junkie and an official announcement by the UFC is imminent.

Dillashaw and Sandhagen have been on different paths since the two were teammates at Elevation Fight Team in Colorado. Dillashaw hasn’t competed since losing the UFC flyweight title to Henry Cejudo in early 2019 and was issued a two-year USADA suspension after testing positive for EPO.

During that time, Sandhagen has emerged as one of the most dangerous bantamweights in the world with his only slip-up coming against Aljamain Sterling at UFC 250.

Following his fight with Cejudo, Dillashaw voluntarily vacated the bantamweight championship belt. Petr Yan and Jose Aldo would go on to compete for the vacant title in which Yan won by TKO at UFC 251. Yan would go on to lose the belt to Sterling at UFC 259 due to a disqualification stemming from an illegal knee.

Before his suspension, Dillashaw was widely-regarded as one of the most accomplished UFC bantamweight champions in the promotion’s history. During his second reign as champion, Dillashaw defended the belt with back-to-back knockout wins over Cody Garbrandt in one of the most heated rivalries in the sport.

The Dillashaw vs. Sandhagen fight adds to an already stacked summer 2021 in the UFC. This includes the trilogy between Conor McGregor and Dustin Poirier at UFC 264, and Israel Adesanya and Marvin Vettori battling for the middleweight title at UFC 263 next month.

What are your early predictions for T.J. Dillashaw vs. Cory Sandhagen?