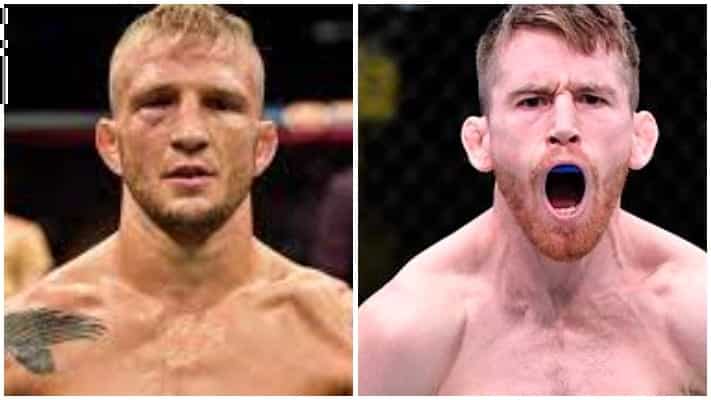 T.J. Dillashaw will make his return to the octagon against bantamweight contender Corey Sandhagen as the main event of UFC Fight Night on May 8th. Coming off his USADA suspension, Dillashaw is not here for the trash-talking Sandhagen is sending his way.

In a recent interview with Brett Okamoto for ESPN, Dillashaw addressed Sandhagen’s comments about his suspension and title contention. (H/T MMAFighting.com)

“He’s become a little bit of a douche lately, talking that s*** which he’s gotta do, that’s the name of the game, but I like Cory Sandhagen. I like all of his coaches, I like Elevation Fight Team, but that’s the business. We’re gonna get out there, we’re gonna handle it, and I’m gonna come back and get my belt.”

While showing Sandhagen some respect, Dillashaw went on to further explain his frustration. “Oh just talking s*** about how me failing a drug test and then something about me taking the worst steroid you could possibly take. Which I wasn’t even taking a steroid,” Dillashaw added. “Just running his mouth on certain interviews and stuff of things he knows is complete nonsense. Just pumping himself up and making himself feel like he’s got a chance in this fight.”

Sandhagen’s comments have struck a nerve with the former champ, likely since they previously trained together. Things went south when Sandhagen’s post-fight comments after his KO of Frankie Edgar threw shade at Dillashaw. Sandhagen even went further to insinuate that Dillashaw didn’t want to fight him. Sandhagen suggested Dillashaw was ducking him by getting the title shot to then refuse to fight him if he won.

Now that the fight is official, Dillashaw is excited about his return. “It wasn’t the only option, but it is the one that is great,” Dillashaw commented. “I love this fight. He’s got a lot of hype behind him. He has two good wins, people are blowing him up right now, but it’s such a good fight for me to get right back on top, right where I left off. I’ll have the belt around my waist by the end of the year.”

Whether or not Dillashaw will regain title in 2021 remains to be seen. However, fight fans everywhere should be excited for the fireworks to come from his match-up with Sandhagen.

Do you think T.J. Dillashaw defeats Corey Sandhagen on May 8th?