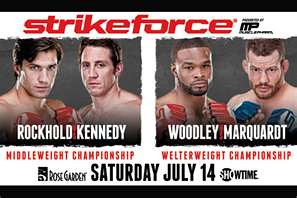 Today, Strikeforce announced that they are adding 2 new fights to Strikeforce: Rockhold vs. Kennedy, at the Rose Center in Portland, Oregon set for July 14, reports Yahoo Sports by way of MMA Weekly.

Ryan Couture (4-1), son of Randy Couture will take on Joe Duarte (10-2) in a lightweight bout. This fight is set to take place on the preliminary card available on Showtime Extreme.

Couture is coming in off of 2 back-to-back victories including his most recent, a TKO over Conor Heun in March. Couture is making his own way in professional MMA through Strikeforce and not riding on the coattails of his UFC Hall of Fame father. His sole loss was to Matt Ricehouse.

Duarte will prove a tough match for Couture as he has been on a five-fight winning streak since his loss to Carey Vanier at Bellator 13 almost 2 years ago; including a pair of Strikeforce victories over Jorge Gurgel and Saad Awad.

The second fight announced today is Jorge Masvidal (22-7) vs. Justin Wilcox (16-4). Both fighters are coming in off of losses which occured on the same card this past December. Masvidal lost to Gilbert Melendez in the headliner and Wilcox broke his seven-fight win streak as he was knocked out in 13 seconds of the first round by Caros Fodor.

The updated card is as follows: