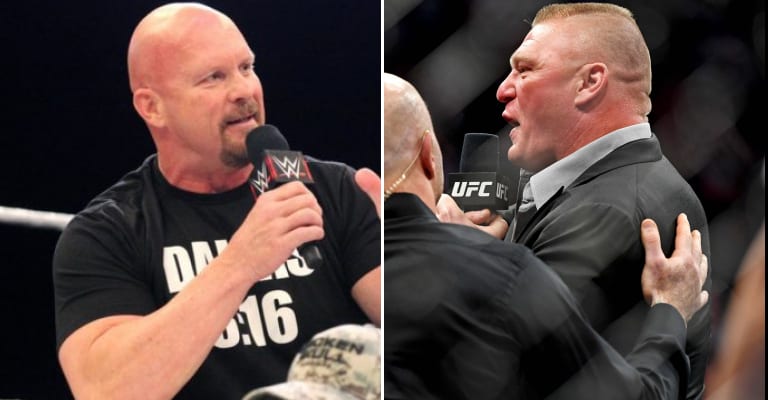 Many MMA fans feel the UFC is swaying too far towards a WWE-like production.

That belief has been brewing for some time now, but never more so than during the mixed reaction to WWE champion Brock Lesnar’s in-cage appearance the moments after Daniel Cormier’s historic knockout win over Stipe Miocic in the main event of last weekend’s (Sat., July 7, 2018) UFC 226 from Las Vegas.

Former UFC champ Lesnar stormed the octagon to berate Francis Ngannou, the once-touted title challenger who had just lost a horrible bout to Derrick Lewis, and Miocic, the record-breaking champion who was just knocked out cold, by calling both ‘pieces of s***,’ a proclamation that was justifiably blasted by both many MMA fans and media members.

That’s the climate of mixed martial arts these days, unfortunately, as the UFC struggles to put together a high-selling pay-per-view (PPV) event after even a card such as UFC 226 featuring a heavyweight champion vs. light heavyweight champ superfight could only muster a reported 400,000 buys. So the UFC is banking on Lesnar to bring in the numbers they cannot on the back of their own efforts, and that’s eliciting a wide range of reactions from the MMA and pro-wrestling worlds.

One prominent name from the scripted wrestling side recently weighed in on Lesnar’s UFC return. WWE fan favorite “Stone Cold” Steve Austin recently discussed UFC 226 on his podcast (quotes via MMA News), revealing he was a huge fan of Cormier and Miocic but believed it would be “DC” who triumphed in Vegas:

“I was talking with my buddy Joe Romero, a guy who designs a lot of t-shirts for me, and we’re both huge DC fans but I’m a Stipe Miocic fan as well. I called Joe up and I said, “man both guys are extremely smart fighters.’ I said, ‘this is gonna be a clinic and we’ll see that wrestling background that DC has, we’ll see what he’s able to do.’ … And I called Joe up and I said, ‘dude, I’m feeling DC on this thing.’”

Austin then gave his take on Lesnar’s appearance, noting that the UFC obviously had Lesnar queued up and ready to set foot in the octagon. That much many MMA fans agree with after he was seen sitting alongside UFC President Dana White right before the main event, but Austin disagreed with said fans by offering his belief that Lesnar’s promo in the octagon was one of the best he’s seen:

“We’ll see what comes out of the promo that happened afterwards with Brock Lesnar. They had Brock queued up, here he comes looking like a million bucks. And Brock just draws a lot of attention whenever he goes anywhere, especially here in the fight game where he’s had a very successful and interesting and lucrative career. And he goes out there and he cuts one of the best promos I’ve ever heard. ‘So and so is a piece of trash, Daniel Cormier I’m coming for you motherf*****.’ Daniel started jawing back-and-forth with him, it was a good time.”

Throughout his UFC 226 assessment on his podcast, Austin showed an overall knowledge, respect, and affinity for mixed martial arts, offering a detailed opinion of the whole main card.

Perhaps that shows that MMA and pro-wrestling are becoming more intertwined than they ever have been, for better or worse. In fact, with Lesnar becoming one of the most hotly-debated topics in MMA, that’s definitely true.

Are you a fan of this new “entertainment” era in the UFC, or should the UFC take a hint from their slumping ratings and stick to what earned them the moniker of the world’s greatest MMA promotion?