England vs. Scotland here in Belfast now, as lightweights Ross Pearson and Stevie Ray go at it. ”Braveheart’ enters the octagon with the bag pipes playing loud. ‘Real Deal’ looks ready to continue his busy year. The crowds are behind both men.

Round 1. Pearson moving well, typically tight guard and fast hands, Stevie throwing kicks early here. Low kick connects flush for Ray, Pearson stalking. Yet to connect flush to the head for either man at the moment, the crowd is hyping up with the viking chants. Pearson taunting, low kick again by Ray, massive head kick clips Pearson. Ray connecting nicely now, Pearson yet to find his groove. Ross eats a head kick or two, lands a nice punch-low kick combo. Switch head kick by Ray answered by a body kick. This is a lively fight now, nasty body kick brings up a red mark on Ray’s gut. Stevie shoots and scoops Pearson up, runs the octagon and slams the Englishman. Pearson stands as the round ends. Tough round to score, I’d say Ray edges a 10-9. 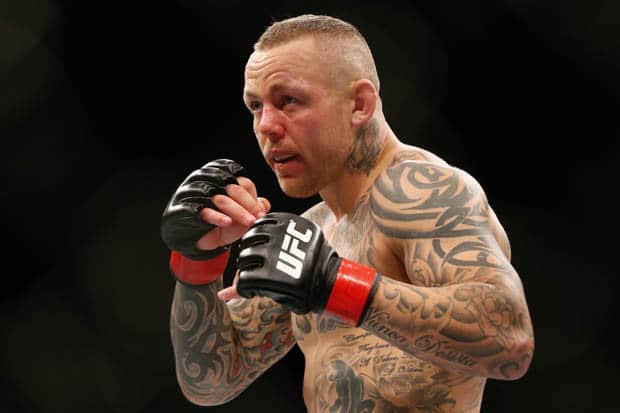 Round 2. Pearson marching his man down again, Ray lands a lovely straight left, and a head kick now. I sense a finish in the making here, Ray with a wild spinning head kick that misses, and the low kicks again. Ray shoots for the takedown, Pearson with the wizard, stays up. They break and Ray uncorks a solid head kick, oblique kick now, and Pearson fluffs the counter. Low kicks again by Ray, and Pearson answers with the same, ‘Braveheart’ keeping a nice range tonight. Pearson becoming frustrated by Ray’s distance, they trade wild punches, body kicks land. Ray lands a noisy head kick on Pearson, great chins on display! Left hands exchanged, round ends. Another close one, 10-9 Ray at a push.

Round 3. Pearson needs to mix his body and head attacks to get a finish here, Ray can stick with his great work so far. Nice show of respect as they high ten, Pearson eats a few kicks early in this round, nice left hook head right hook body combo by the Englishman. HUGE low kick by Pearson reverberates around the arena. Pearson moving nicely now, avoiding punches, big right hand to the body by Ross now. Ray is landing to the body but Pearson catches the kick and wings a knee.  Right to the body, but Pearson needs to go to the head afterwards or it’s just not gonna happen. Ray with a head kick, low kick now, Pearson with a single shot to the body again. One minute left, Pearson misses a punch but lands a head kick. Round ends, maybe 10-9 Pearson, but it’s 2-1 for Ray in my opinion.