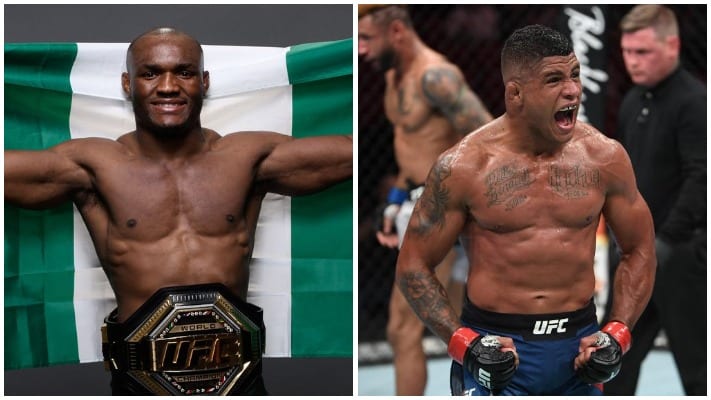 Burns is set to finally collide with Usman for the welterweight title when they headline the upcoming UFC 258 pay-per-view event taking place February 13 in Las Vegas.

It will be a clash of former teammates as well but even casting that aside, Thompson believes Burns has all the tools to be Usman’s toughest matchup so far.

That said, he still believes Usman’s wrestling will play a role.

“I think this is going to be Kamaru Usman’s toughest fight for sure,” Thompson told the “Weighing In” podcast (via MMA Junkie). “I mean (Burns has) got the ground, he’s a high-level jiu-jitsu practitioner, he’s got good striking, he’s been knocking dudes out. So I think he’s the better well-rounded fighter he’s faced, even Colby Covington. But Usman, on top of that, he’s an intelligent fighter. He’s got pressure and cardio for days. He’s got a gas tank like no other, but I do believe he can outwrestle Burns.

“I think he could wrestle him and neutralize his jiu-jitsu. His top game is really, really good, especially up against the fence. If he can get him pinned up against the fence where he’s able to control his opponent’s hips, I think he’s got it. But the thing is, getting in there. Burns’ striking is fast. That dude’s explosive. He may not have the reach Kamaru does, but he’s explosive and you saw it against Tyron Woodley. He knocked him down, something I wasn’t able to do.”

Despite the praise for Burns — who has been on one heck of a run since moving up to welterweight from lightweight — Thompson ultimately sees Usman coming out on top to earn his third title defense.

“I believe Kamaru Usman could do it,” Thompson added. “I like Kamaru Usman, I think he’s a great champ. I think he holds the title very well. I’m going for Usman, man. I think Usman’s got it.”

Perhaps one more win could see “Wonderboy” himself get the next crack at the title.

Who do you have winning between Usman and Burns?