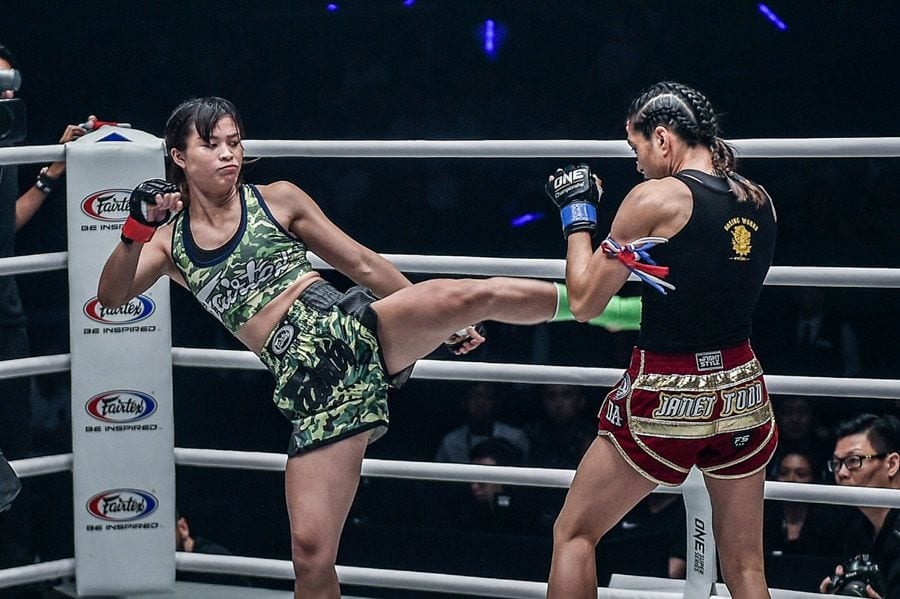 ONE Championship‘s current golden girl Stamp Fairtex returns to the ring this week to defend her ONE Atomweight Kickboxing World Championship.

The 22-year-old Thai will take on America’s Janet Todd in the main event of ONE: King of the Jungle, which does down this Friday inside Singapore’s Indoor Indoor Stadium.

This meeting will be the second bout between the pair but the first under kickboxing rules. Todd and Stamp first clashed in February of 2019 with the two going toe-to-toe for the vacant ONE Atomweight Muay Thai World Championship. Stamp emerged victorious with a unanimous decision win. Still, Todd, gained a lot of confidence from that bout, and Stamp is not expecting this week’s meeting between the two to resemble their previous encounter.

“I think Janet Todd will come with some different style because this is kickboxing. So I think the pace will be faster. I know she will try to pressure me more on this fight,” Stamp said, speaking to Lowkick MMA.

Since arriving at ONE Championship, Stamp’s career has gone from strength to strength. She currently holds both the ONE Atomweight Muay Thai and Kickboxing World Titles and has her sights set on Angela Lee’s MMA atomweight crown. Stamp is an athlete who loves competition and being able to test herself against the world’s very best. She is currently relishing the opportunity to compete in both versions of the stand-up game as well as MMA.

“I enjoy both types, but for MMA, I feel more hunger because of it still new to me, and I have a lot to learn. I have to work super hard for this third belt, and I know it won’t come easy,” she explained.

“For MMA, I still have a long way to go. I am not ready for a title shot. At least 5-6 more fights, and maybe I will be ready. The competition is very difficult in Atom weight division. I still need to test my skill first before I dare to ask for a title shot.”

After taking up Muay Thai at the age of five, outside observers could be forgiven for thinking that with two titles to defend and one to chase, Stamp could run the risk of burn out. However, from what she says, it appears she’s having the time of her life.

“I don’t stress myself at all. I am having the time of my life now. I really enjoy putting all my dedication into Muay Thai, Kickboxing and MMA. I know if I give it all, I will have no regret.”

ONE: King of the Jungle will feature Thai fighters in both the main and co-main events. In the co-main, Thai legend Sam-A Gaiyanghadao will take on Australia’s Rocky Ogden for the vacant ONE Strawweight Muay Thai World Championship.To have two Thai’s competing in prime spots on a card outside of their home nation is an inspiration to Stamp.

“I feel very proud to have my fellow countrymen fighting on this card. It shows that Thailand fighters are among the best fighters in the world. All we both need to do now is defend our belts, to represent Thailand, ” she said.

Todd will no doubt be a lot more aggressive this time around, and has the skillset to capture Stamp’s crown. However with Stamp continuing to improve and gain in confidence, it would be a brave person who would be willing bet against the Thai retaining her title this week.