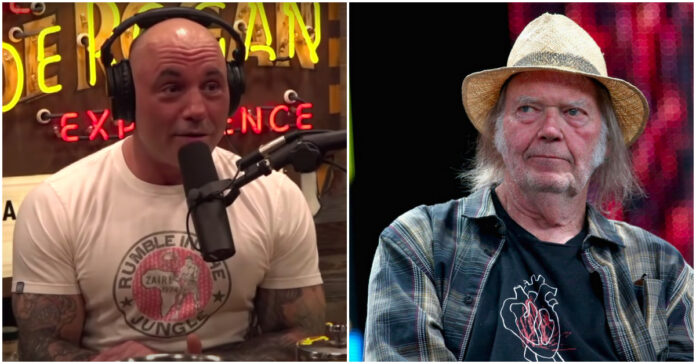 Just days after Canadian music icon Neil Young forced Spotify with an ultimatum to choose between keeping him or Joe Rogan on the platform, the digital streaming giant has made it clear that their loyalty resides with Rogan.

Earlier this week, the ‘Old Man’ singer told Spotify that they could have “Young or Rogan, not both.” The demand circles back to reports that Rogan’s podcast, The Joe Rogan Experience has been spreading vaccine misinformation through having unqualified guests on the program.

Before the removal of his catalogue, Young had over six million monthly listeners on the streaming service which represents around 60 percent of his total digital audience. Young encouraged his fans to stream his music from one of a number of other platforms available including Apple Music and Amazon Music. He also thanked his record label, Warner Music Group for their support of him fighting for his beliefs.

With this, Young can of course no longer collect royalties for his music on the platform. This is something that’s sure to come with a financial hit as, throughout the pandemic, nostalgic listening was reported to be up over 70 percent.

The longtime UFC play-by-play announcer is arguably the most impactful figure on Spotify after signing a 100 million dollar deal to exclusively stream his podcast on the platform in 2020 and this isn’t the first time in recent memory that Rogan’s popular show sparked controversy among the masses.

Earlier this month, a group of 270 scientists and medical professionals penned an open letter to the streaming service requesting they take action against the spread of mass misinformation on their platform.

The podcast brings in an average of 11 million listeners per episode making it the world’s most popular podcast. While Spotify currently has no written policies against spreading misinformation related to COVID-19, they have addressed a responsibility to mitigate this type of talk on their platform.

Did Spotify make the right decision in siding with Joe Rogan over Neil Young?