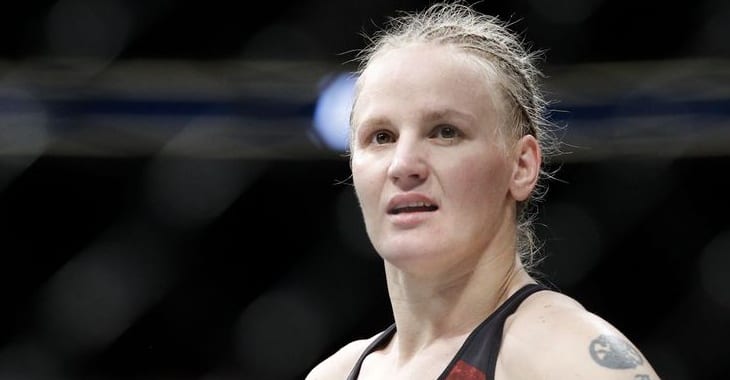 UFC 230 looks to finally have a main event.

After weeks of speculation, the Madison Square Garden pay-per-view (PPV) has reportedly landed a headliner. Per ESPN’s Brett Okamoto, a UFC women’s flyweight title bout will headline the card. Valentina Shevchenko will take on Sijara Eubanks:

BREAKING: Valentina Shevchenko vs. Sijara Eubanks for the vacant flyweight tile will headline UFC 230 on Nov. 3 in Madison Square Garden, per multiple sources.

Eubanks then tweeted the fight had been signed shortly thereafter:

It’s signed!! UFC 230 Nov 3 at the iconic Madison Square Garden for the women’s Flyweight Title! Big thanks @Mickmaynard2 @danawhite for giving me my shot. @AliAbdelaziz00 for being the manager in the game period. @MarkCoachmark13 @ricalmeidabjj @JamalPatterson and the whole team pic.twitter.com/yoxwPYQXI4

The action goes down from Madison Square Garden on November 3rd in New York City. Shevchenko was initially scheduled to fight for the 125-pound strap in Dallas last month. Unfortunately, opponent and then-champion Nicco Montano was hospitalized due to a bad weight cut. As a result, the fight was called off and Montano was stripped of her title.

UFC President Dana White announced Shevchenko would get the opportunity to fight for the vacant belt soon. It was initially speculated that Shevchenko could fight former 115-pound champion Joanna Jedrzejczyk for the honors. However, it appears the UFC had other plans.

“”Bullet” has won three of her past four fights inside the Octagon. Her sole loss was a bantamweight title fight against Amanda Nunes. Nunes defeated Shevchenko via controversial split decision to retain her title. Shevchenko now has her eyes set on being the UFC’s 125-pound champion.

Eubanks has only fought once before in the UFC. She holds a professional mixed martial arts (MMA) record of 3-2. Eubanks’ last Octagon appearance resulted in a unanimous decision win over Lauren Murphy.

It had initially been speculated that Jon Jones could main event the card. His United States Anti-Doping Agency (USADA) suspension will be up later this month on October 28th. This frees him up to make his highly-anticipated Octagon return in his home state. Unfortunately, it looks like that won’t be happening.