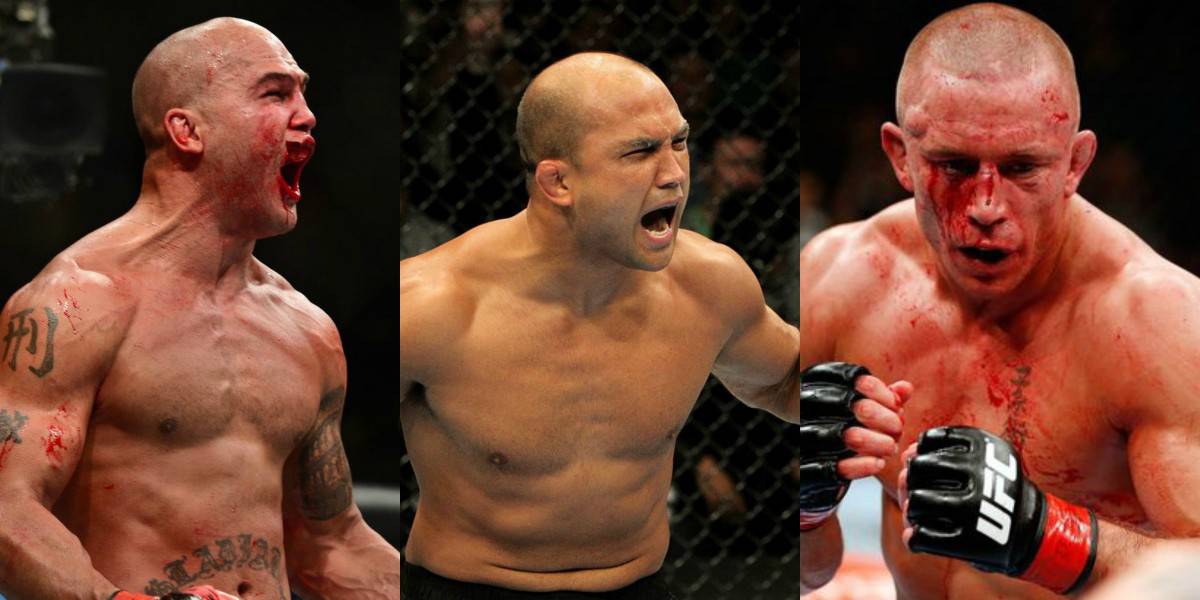 The UFC welterweight division has been one of the most consistent classes in mixed martial arts (MMA) over the past 10 years, if not the best.

As a middle ground for athleticism, speed, versatility, and finishing power, the 170-pound weight class has offered some of the most exciting championship tilts in promotional history. Not to mention legendary fighters such as Georges St-Pierre, Matt Hughes, and B.J. Penn.

But as today’s sport continues to evolve, so does the welterweight appeal. From a tumultuous Robbie Lawler to striking aficionado Stephen “Wonderboy” Thompson, from a resurgent Carlos Condit to an overpowering Tyron Woodley, it’s starting to look like the division will produce even more title fight fireworks in the near future.

However, in order to appreciate what we might see from the current group of core contenders, we must first look back on the timeless battles of the past. Ones that created Octagon gods, crippled legends, and celebrated perfected violence. 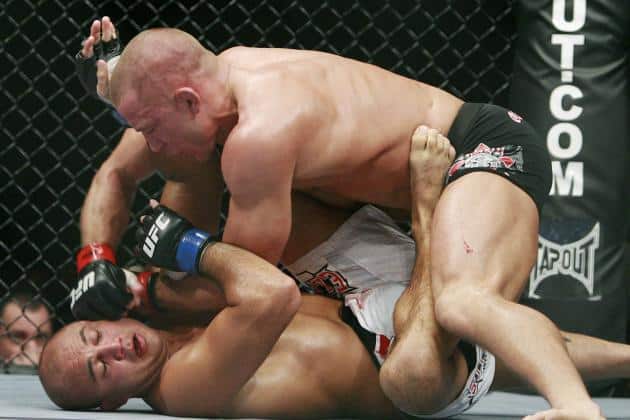 With MMA greats Georges St-Pierre and B.J. Penn at the helm at UFC 94, you’d think this title fight would land higher on the list.

But when you consider the one-sided performance that GSP put forth, No. 8 seems like a good spot.

Heading into UFC 94, the Canadian superstar was looking to finally put an exclamation mark on his rivalry with “The Prodigy,” having won a split-decision victory back at UFC 58. Despite the promotion’s best efforts to hype the contest as Champion vs. Champion, Penn’s lightweight success did not translate well back to the 170-pound division.

St-Pierre’s fourth-round TKO by way of corner stoppage forever ended Penn’s bid to recapture welterweight glory, despite the Hawaiian’s claim that GSP had greased in between rounds. 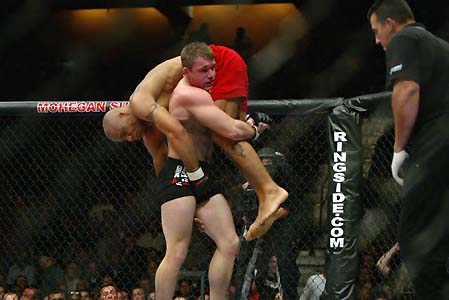 In one of the most exciting performances in UFC history, welterweight champion Matt Hughes retained his title with a first-round submission victory over nemesis Frank Trigg at UFC 52.

The grudge match began with Trigg nearly putting Hughes to sleep early in the fight. But in dramatic fashion, the Pat Miletich product escaped the choke, scooped Trigg up, ran him across the cage, slammed him on the canvas, and proceeded to lock in his own submission.

It remains one of the craziest first round wars in UFC history and an important moment in the legendary career of Hughes. 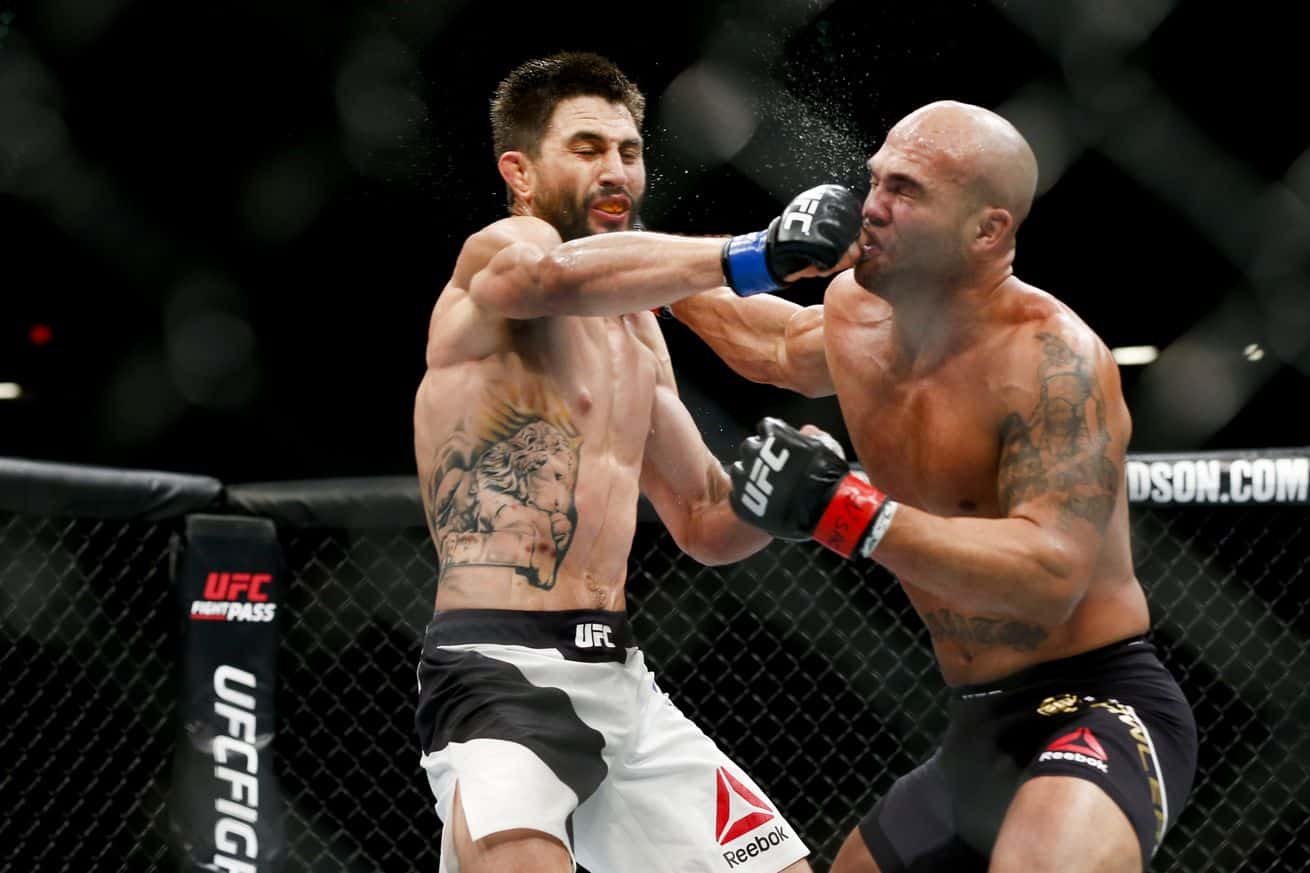 As the most recent welterweight title fight on this list, Robbie Lawler vs. Carlos Condit at UFC 195 continues to gain steam among hardcore fight fans.

Through five gritty rounds of action, “Ruthless” and “The Natural Born Killer” waged ultimate war. Condit was able to utilize his reach, versatility, and distance control to pick apart the champion to the tune of 176 significant strikes landed, but Lawler’s late-fight heroics were enough to win a super close split-decision.

It is easily the most frantic, violent, and barbaric fifth round in UFC welterweight history. And one that furthers expands Lawler’s aura of invincibility. 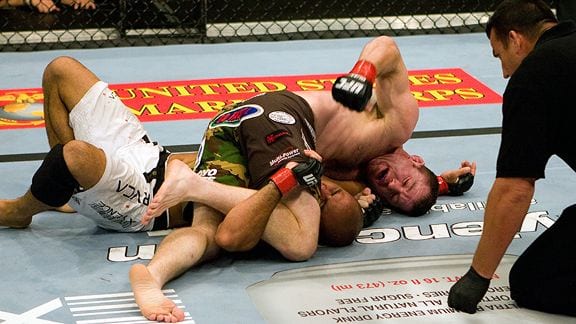 When Matt Hughes beat B.J. Penn by way of TKO at UFC 63 he was exacting revenge for when “The Prodigy” ended his long-time welterweight title reign back at UFC 46 via submission.

The knockout defeat was the first of Penn’s career and a victory for Hughes that reestablished his spot as the best welterweight in the world at the time.

It s undoubtedly Hughes’ biggest professional feat outside of submitting Georges St-Pierre back at UFC 50. 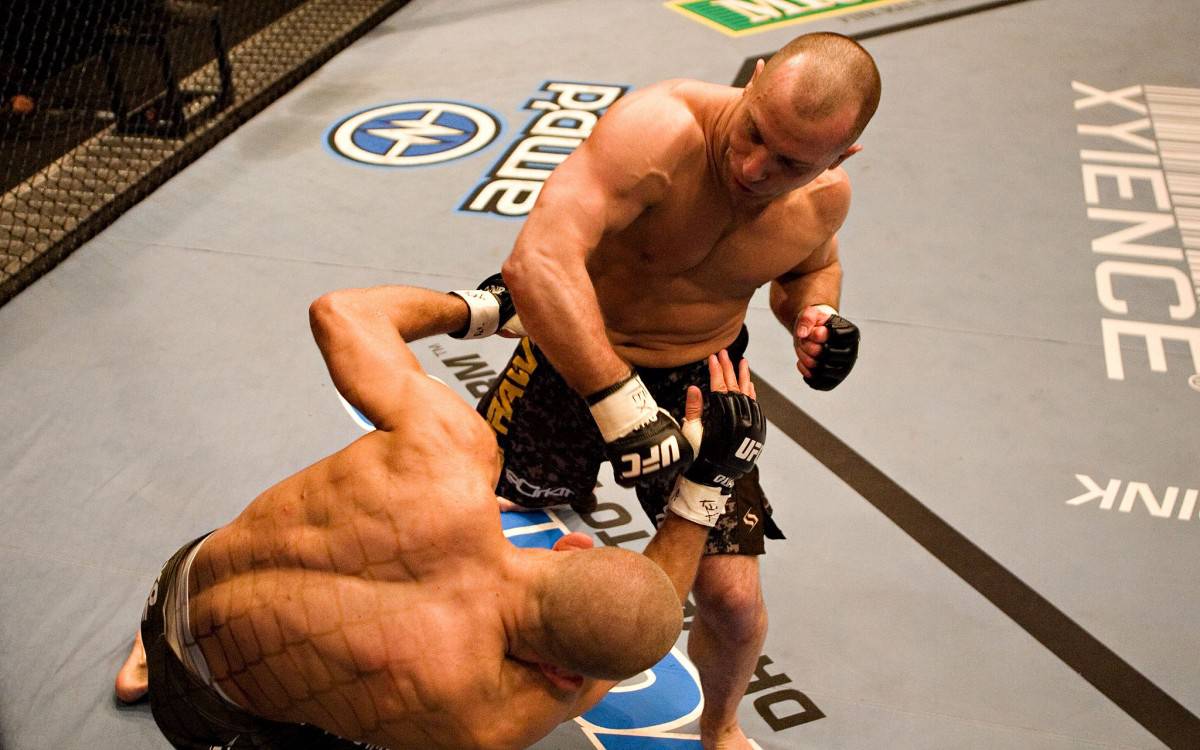 Nobody in their right mind would have ever predicted that Matt Serra would knock out Georges St-Pierre at UFC 69.

St-Pierre was widely considered the best pound-for-pound fighter in the world and a guy who was destined to hold on to his 170-pound title for a long time after beating Matt Hughes just one fight before at UFC 65.

While GSP would go on to win the title back from Serra and defend it nine-straight times, his loss to “The Terror” will forever be remembered as the biggest upset in UFC history (and quite possibly MMA history).

It his his only defeat by way of strikes in his entire career and a victory for Serra that truly highlighted his world-class game. 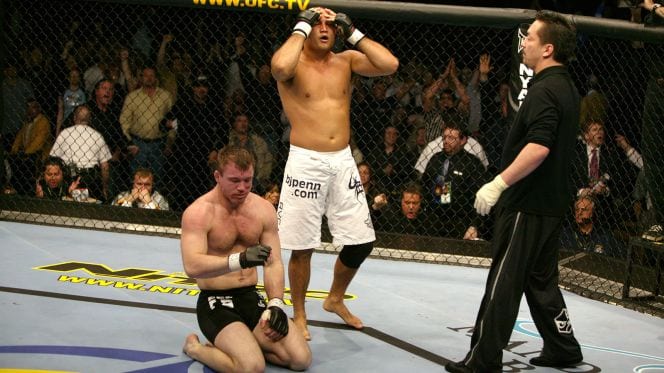 B.J. Penn’s submission victory over Matt Hughes at UFC 46 is the fight that defined his career.

Sure, the Hawaiian had knocked out Caol Uno and submitted Takanori Gomi in his prime before that, but Hughes represented the very best welterweight in the business. He had successfully defended his title five times prior to his initial meeting with “The Prodigy” and was widely considered one of the best ground specialists in all of MMA.

The victory confirmed that Penn’s grappling was ahead of his time and that he deserved to be mentioned alongside the greats of the sport. Penn would later vacate his welterweight title after a move to K-1. 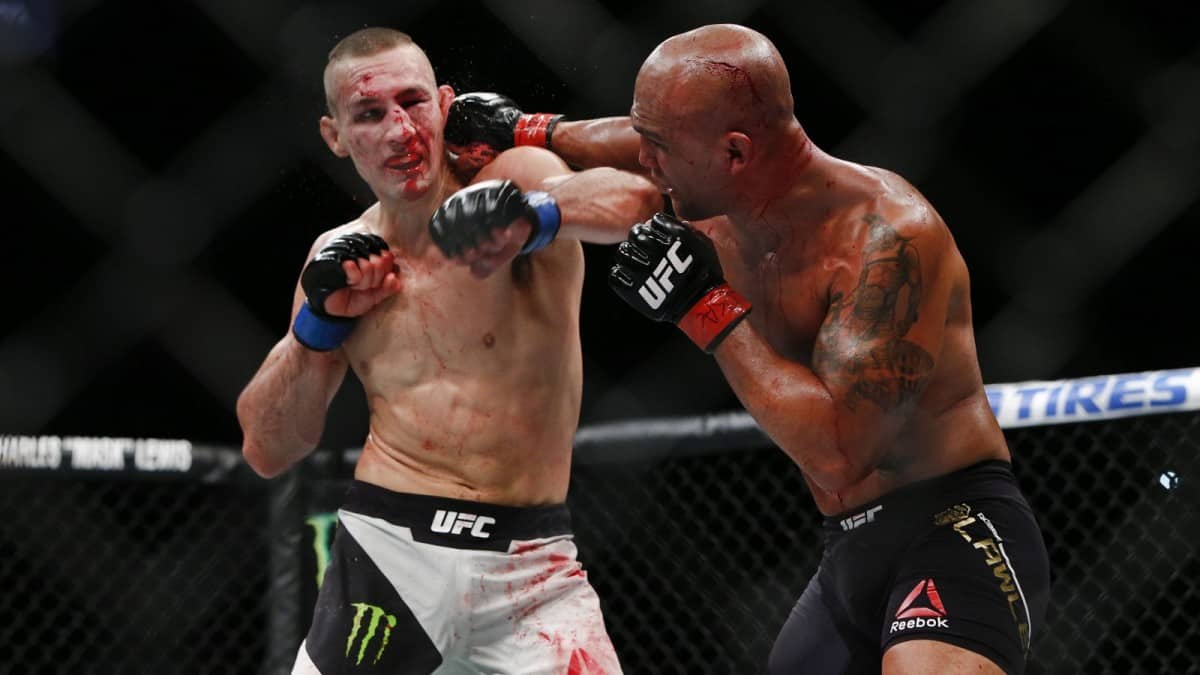 No other fight on this list possessed the brutality, striking ferocity, momentum-changing action, and gritty determination that Robbie Lawler vs. Rory MacDonald at UFC 189 did.

Not to be overshadowed by Conor McGregor‘s first ever UFC featherweight championship win, “Ruthless” and “The Red King” went toe-to-toe in a lip-splitting, nose-breaking, blood-infused brawl for the ages.

Heading into the fifth and final round, many onlookers had Lawler down on the scorecards. But in dramatic and seemingly typical Lawler fashion, the champion dug deep and proceeded to batter MacDonald into oblivion. Countless shots to his already shattered nose proved too much and Lawler would retain his title via TKO.

The championship title won Fight of the Year for 2015 and is one of the best back-and-forth affairs you’ll ever see. 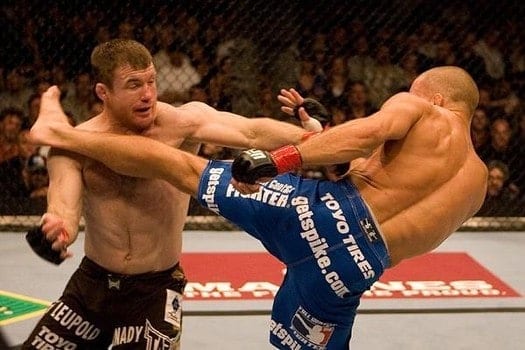 The best UFC welterweight title fight of all time is Georges St-Pierre vs. Matt Hughes II at UFC 65 and for good reason.

Back at UFC 50, just three fights into his promotional career, GSP was submitted by Hughes via first round armbar. It was the second time Hughes had captured welterweight gold and the first loss of St-Pierre’s illustrious career.

So you can imagine how important a rematch at UFC 65 was to a focused and determined GSP. After defeating B.J. Penn via spli decision the fight before, the rising Canadian superstar earned the opportunity to fight for the belt once again.

With everything at stake, St-Pierre landed a perfectly timed head kick in the second round and secured the TKO finish. It was GSP’s first UFC title win and a victory that ultimately served as a passing of the torch.

Hughes would never regain his dominant form, and despite briefly slipping up against Matt Serra, St-Pierre would go on to reign as champion for over five years.