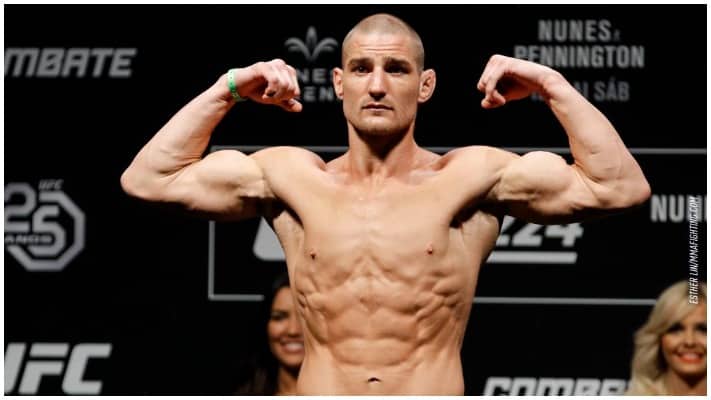 Sean Strickland has let it be known exactly how much he dislikes Luke Rockhold.

The middleweight duo are due to square off at UFC 268 on November 6.

Ahead of the bout, Strickland has been speaking about his disdain for his opponent.

“Luke is a f*cking c*nt and he deserves to go to sleep permanently, but he’s a good fighter,” Strickland told The Schmo. “He was a champ for a reason. At the end of the day, he can say whatever he wants, but he was a champion… back when it was a little bit easier. He would never be a champion now.”

“He is a f*cking c*nt, but he’s a great fighter. He f*cking deserves to be there. I’m excited and I’m motivated.”

Strickland explained that his dislike for Rockhold comes from training with the former UFC middleweight champ during his short reign at the top of the 185lb division.

“I’m a pretty respectful guy, and I gave him the benefit of the doubt, he was a champion, and he was just a f*cking c*nt, dude. Every time this f*cking guy opens his mouth, he’s just an arrogant f*ck,” Strickland said.

“He’s the kind of dude that when he’s f*cking, he makes sure there’s a mirror, just so he can watch himself f*ck,” Strickland added. “Dude’s a piece of sh*t… Male model or not, that doesn’t mean you can be a f*cking c*nt. I know plenty of models that aren’t c*nts.” (Transcribed by Middle Easy)

Strickland has been in impressive form as of late. The 30-year-old has strung together four straight wins since making the move from welterweight to middleweight. Most recently, he picked up a lopsided decision victory over long-time 185lb contender, Uriah Hall.

Rockhold hasn’t fought since being knocked out by Jan Blachowicz in July 2019. The 36-year-old flirted with the idea of retirement before re-committing himself to MMA. Rockhold has lost three of his last four fights and is without a win since 2017.

Who do you think will win at UFC 268? Sean Strickland or Luke Rockhold?