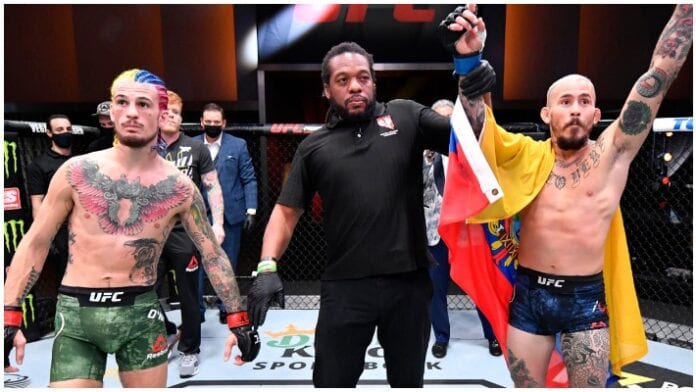 Sean O’Malley has shut down talk of a potential rematch with Marlon ‘Chito’ Vera.

‘Suga’ suffered his first and only career defeat against Vera at UFC 252 back in August. O’Malley ate a low leg kick early and never really covered. ‘Chito’ swarmed with nasty ground and pound before the referee stepped in to save the young prospect from suffering a vicious knockout.

O’Malley has been very vocal about the loss being something of a fluke and insisted he is a much better fighter despite losing on the night. Vera has since gone on to suffer a decision loss at the hands of former featherweight champion Jose Aldo. The Ecuadorian has spoken recently about not wanting to rematch O’Malley who has now done the same.

“For me to rematch (Vera), he’ll have to be on a win streak. It’ll have to make sense,” O’Malley said on his YouTube channel.  “I feel like I’m just a different level fighter. That would be like fighting someone backwards.”

“He said there’s not enough money in the world to fight me again,” O’Malley added. “But dude, if he loses another fight and he’s like, ‘I want to fight Sean.’ He’s about to be Chito ‘Prelim’ Vera.” (Transcribed by MMA News)

Do you want to see Sean O’Malley rematch Marlon Vera?