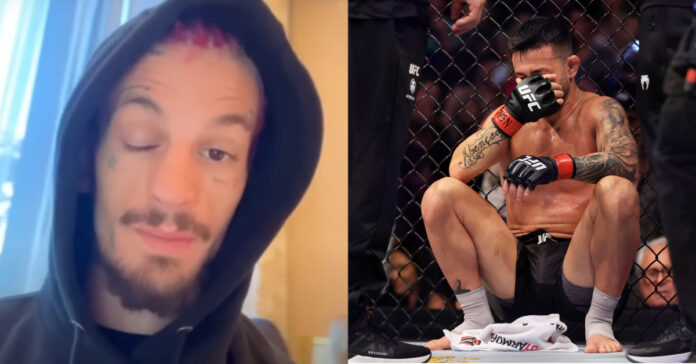 Sean O’Malley’s goal of finishing Pedro Munhoz at UFC 276 didn’t go according to plan. The pay-per-view opener ended in a no-contest due to an accidental eye poke by O’Malley.

At UFC 276, the ringside physician ruled that Munhoz couldn’t continue forcing referee Jason Herzog to stop the bout in the second round. After the fight, the 27-year-old believed he was winning the fight and that Munhoz was ‘100 percent’ looking for a way out.

“Initially when it happened, I didn’t feel like it was bad. I thought we were going to be fighting in 20 seconds,” O’Malley said post-fight. “I was piecing him up. I didn’t get hit one once.”

Munhoz relied on leg kicks in the opening round. O’Malley was focused on defending and didn’t show much offensive pressure. In the second round, O’Malley began to find his range and land heavy shots on Munhoz before the fight was called off.

Sean O’Malley Believes He Was Dominating The Fight

Two of the three judges had Munhoz winning the first round. O’Malley responded by pointing out how he checked Munhoz’s leg kicks.

“Have those judges kick me and I’ll check their kick and they’ll be like ‘Oh okay, that hurt’. That’s a strike for me,” O’ Malley said. “That hurt Pedro. Every time that he would kick me and I check it, that hurt him. For those judges to say that’s a score for him, they’re completely stupid. Literally just stupid.”

Many fighters reacted to the no-contest with some questioning the legitimacy of the eye injury that ended the fight.

After a post-fight hospital visit, the Brazilian native shared his diagnosis. The eye-poke resulted in a scratched cornea.

“I couldn’t see anything for 20 minutes. I was taken to the hospital and they used a special eye drop that made my eye numb so they could open my eye,” Munhoz said on Instagram (Portuguese translation via MMA Fighting).

“They did an exam and the medical report I have is that there’s a scratch in the cornea all the way around it. I couldn’t open my eye because of that and couldn’t see anything. The referee asked if I could see at all and the doctor decided to stop the fight. That’s what happened tonight.”

The no-contest didn’t phase O’Malley’s confidence as he sent out a number of tweets acknowledging his “win” at UFC 276.

When asked about a potential rematch with Munhoz, O’Malley wasn’t committed to the idea.

“I really believe that was best-case scenario for Pedro,” O’ Malley said. “He couldn’t hit me. He couldn’t hurt me. Yeah, I don’t know.”

It was the first no-contest for O’Malley and the second for Munhoz in their MMA careers.