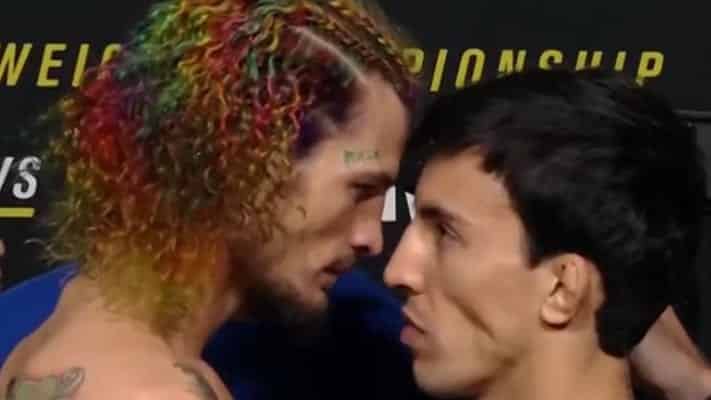 Next up on the UFC 260 main card is a bantamweight bout between Sean O’Malley and Thomas Almeida.

Round 2: O’Malley stings Almeida with a low kick. Almeida responds with a body kick. O’Malley misses a spinning wheel kick. O’Malley slips as Almeida attacks the legs. O’Malley continues to teep the left lead leg of Almeida. O’Malley connects with a straight left. Almeida misses a spinning wheel kick. Almeida eats a front kick to the body. Almeida is pressured by O’Malley who responds with a big leg kick that forces O’Malley to back off. O’Malley slips during an encounter as Almeida lands a big punch but is unable to enter his guard with O’Malley threatening with up kicks. The round ends.

Round 3: O’Malley hurts Almeida with a huge leg kick. Almeida eats a teep kick to that leg soon after. Both fighters exchange in flurries but O’Malley is the one connecting more. O’Malley lands some stinging jabs. Almeida lands big a leg kick. O’Malley drops Almeida with a short left hand and knocks him out cold with a right on the ground!