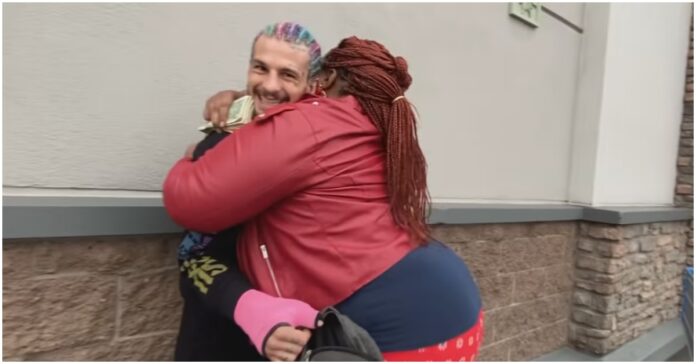 Sean O’Malley must have been feeling the festive cheer this holiday season as he took to a local Walmart to hand out $100 to random shoppers who passed him by. O’Malley’s reasoning for doing this makes it even better as the UFC star wanted to give back to the community following the successful year he has had himself.

“I literally have thousands of dollars, no cap. So, we’re going to be handing out a bunch of f***ing money to peeps. And hopefully, we can find some people that need the money. You know what I mean?”

Many people who passed O’Malley were extremely grateful, and those even more who recognised the UFC star and took the opportunity to get a photo with him as well. One woman held O’Malley’s hand and said a prayer for him to show her appreciation for what he was doing.

However, the UFC star was taken back when a handful of people passing by actually declined the offer from O’Malley but still took the time to appreciate his gesture.

In the video it is clear to see that Sean O’Malley is using support on his right hand, this would later be revealed that ‘Suga’ had broken his right thumb which he believes he did back at UFC 269 following his impressive first round TKO over Raulian Paiva.

This isn’t the first time O’Malley has suffered from injuries and following on from that performance told the world in a post-fight interview the issues he was having heading into his matchup at UFC 269.

“I haven’t grappled or sparred in three weeks. I was lying in bed one night, 99 percent sure I was going to pull out of this fight. I couldn’t grapple, I couldn’t spar. All I could do was run and hit mitts and I just knew how many people wanted to come out here and wanted to watch me fight and I just couldn’t pull out.” (transcribed by sportskeeda.com)