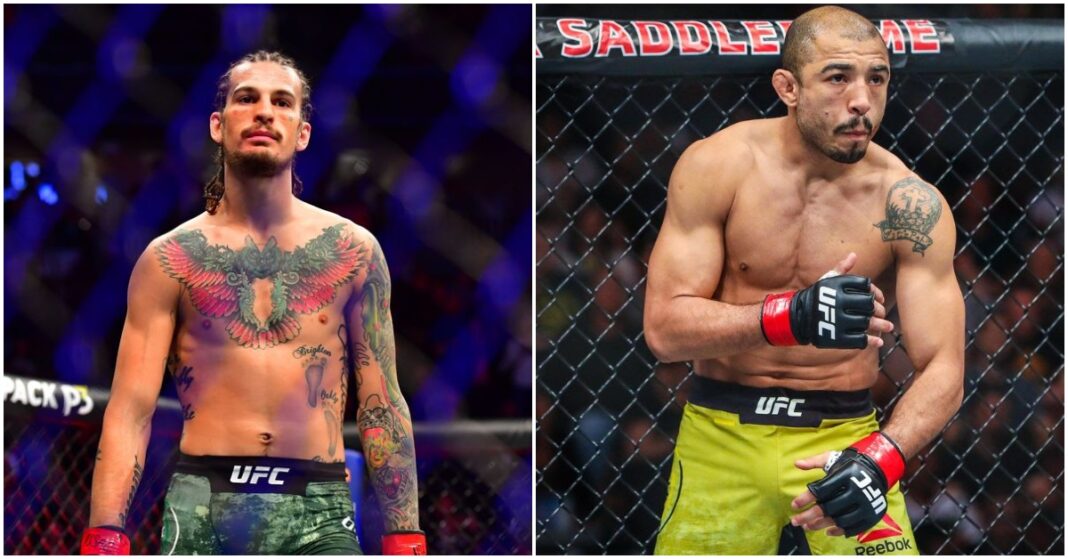 Sean O’Malley expressed his desire to match up with Jose Aldo in the future when speaking in a video posted to his YouTube channel.

The American will look to continue his hot streak when he enters the Octagon this weekend to take on Raulian Paiva at UFC 269. O’Malley comes into this bout following on from his striking masterclass against the tough Kris Moutinho.

‘Suga’ spoke about Jose Aldo and was full of praise for the Brazilian, who himself has seen a career resurgence following on from his move down to bantamweight which started off with two losses for the former featherweight champion. However, since then he has gone on to pick up three wins in his new division, with his most recent outing a strong five-round display against Rob Font.

“Aldo’s a tough fight 100 percent. Got to be so f***ing sweet to fight him someday. We’re on track, I mean we got a f***ing couple wins and we could fight him… He’s so good at countering a jab, his f***ing pull twos are so fast… I think that’s why you switch stances, throwing different jabs and stuff but yeah, I mean in the third round or the fourth round, he (Aldo) was kicking the f**k out of his leg, but he didn’t throw one until then which is crazy.” (transcribed by sporkskeeda.com)

Following on from his victory over Rob Font, Aldo expressed his interest in fighting for the title but given time schedules and Petr Yan and Aljamain Sterling needing to face each other first, Aldo was also open to the idea of fighting TJ Dillashaw.

What’s Next for Sean O’Malley?

Sean O’Malley made no illusion of the fact that he would need to win a few more fights to earn himself a matchup with Aldo. So, given he can get past Paiva this weekend who would you like to see O’Malley take on next? Just above him in the rankings sits Marlon Moraes who would provide a good test for O’Malley or given the comments he made earlier this week could a potential match-up with Dominic Cruz be the next step for ‘Sugar’.

Do you think Sean O’Malley beats Raulian Paiva this weekend at UFC 269?