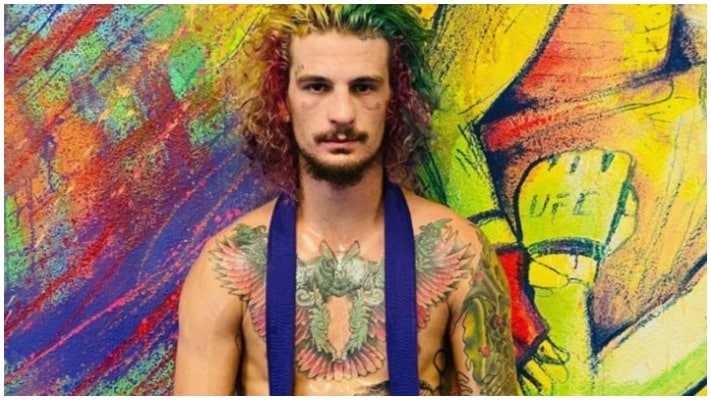 Sean O’Malley has admitted that wants to avoid fighting tough opponents at the moment.

During a remarkably honest conversation on the “No Jumper” podcast, ‘Suga’ explained that his slow progression towards the bantamweight ranks is calculated and has all to do with the amount of money he makes.

“Next fight, a lot of people want me to fight someone ranked,” O’Malley said. “They wanted me to fight someone ranked last fight. I was supposed to fight Louis Smolka (at UFC 264). For me, I have a contract to fight a certain amount of fights, and I’m gonna get paid a certain amount of money whether I fight Louis Smolka, the dude I was supposed to fight, or I fight Petr Yan, the No. 1 bantamweight in the UFC. I get paid the same. I’m gonna fight this dude (who is lower). And I’m going to fight this dude on a Conor McGregor pay-per-view.

“Chael Sonnen always says fight the worst dude on the highest part of the card,” O’Malley added. “A lot of bantamweights, and just people in the UFC, they definitely hate, and it comes from jealousy. I’m getting way more eye balls than them. I perform in there. You can go and watch some of these guys perform, and you literally pick up your phone, start surfing Instagram, you just don’t give a f*ck what they’re doing.” (Transcribed by MMA Junkie)

O’Malley is fresh off a third-round TKO win at UFC 264. The 26-year-old squared off against UFC newcomer Kris Moutinho on the undercard of Dustin Poirier vs. Conor McGregor III. Prior to that, O’Malley faced Thomas Almedia who entered the fight on a losing streak that stretches back to 2016.

The bantamweight prospect has only stepped up his level of competition on one occasion. O’Malley fought Marlon Vera at UFC 252 in August 2020 and was stopped inside one round by ‘Chito’.

Do you think Sean O’Malley is being smart by avoiding tough fights until his level of pay increases?