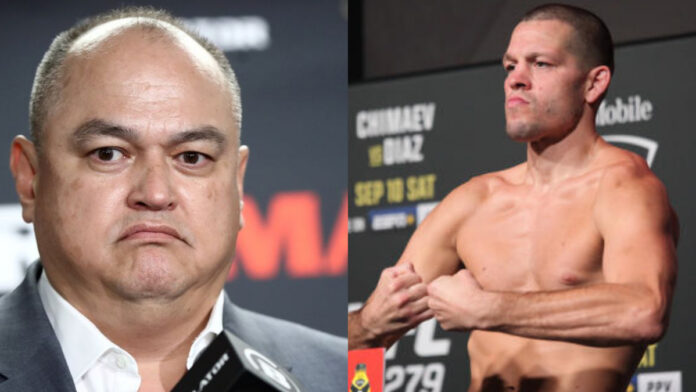 Bellator president Scott Coker revealed the “dialogue” his team had with Nate Diaz after his UFC exit.

Diaz completed the last bout on his contract with the UFC against Tony Ferguson in the main event of UFC 279. The fan favorite came out on top of his contest with ‘El Cucuy,’ submitting him with a guillotine choke in the fourth round. He had been rallying to get out of the promotion and explore free agency.

Coker recently shared that his team was interested in bringing the Stockton-based superstar to Bellator and that they were in communication with Diaz to make it happen.

Renowned MMA journalist Ariel Helwani had tweeted about an exclusive negotiation period that was on Diaz’s contract, giving UFC the sole right to make any offers, making it illegal for Bellator to enter into any such discussions.

At the Bellator 285 post-event news conference, Scott Coker clarified his earlier comments and updated that Bellator contacted Diaz’s management team. He revealed that no further developments could happen until December.

“Well, here’s the thing, is that my guys reached out to the management and the management came back and said, ‘Look, he still has an exclusive negotiation period,’” Coker told reporters at the Bellator 285 post-event news conference. “So, let’s see how that plays out.” (ht MMA Junkie)

As one of the biggest names in the sport, Diaz is a highly-sought after fighter. Coker expressed his interest in wanting to sign Diaz to Bellator earlier this week.

“Well, we are definitely talking to him,” Coker said. “We’ve reached out and I know he’s probably talking to everybody. He’s, I think, in a pretty good situation. I know he wants to fight Jake Paul. Jake Paul’s fighting, you know, against Anderson Silva on Showtime pay-per-view, which is our home network, so there’s some synergies here.”