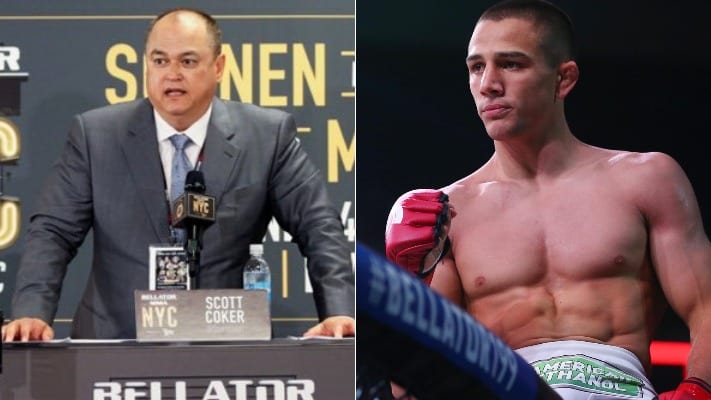 Recently, Bellator MMA announced the matchups and participants for their 16-man Featherweight Grand Prix Tournament. If you haven’t seen those yet, check them out below:

Many noticed that one of the promotion’s most notable names, Aaron Pico, was left off the tournament. Pico was hyped as a mixed martial arts (MMA) prodigy heading into his professional debut, only to be defeated under the Bellator banner via submission in 24 seconds.

Pico was able to regroup and embark on an impressive four-fight win streak, before getting knocked out by Henry Corrales at Bellator 214 in January. In his previous fight at Bellator 222, Pico was again defeated. This time in dynamic fashion at the hands of Ádám Borics via a flying knee.

“With Aaron, we’re going to meet with his manager either this weekend or next week,” Coker said. “I always felt like after his last fight in New York, let’s take a beat back. He’s a great kid. We have a lot of respect for him. We think he’s going to still come back and be great, but I think it’s time to take a beat.

“Let him train and let him get through this process. He would be fighting as early as Sept. 7 in eight weeks coming off that fight in New York. I think he’ll be back, it’s just a matter of time.”

What do you think about Coker’s decision to leave Pico off the tournament? Do you think he made the right call?