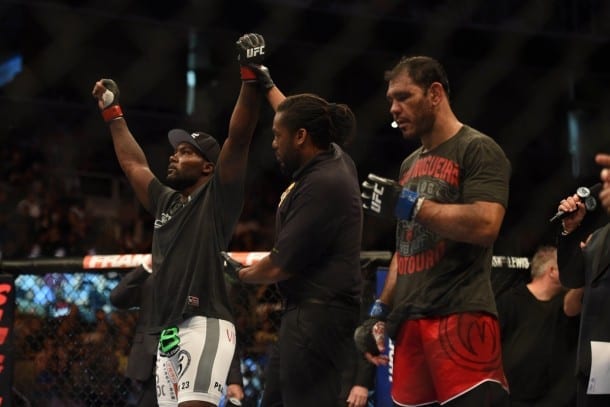 Anthony “Rumble” Johnson will have a new opponent on his trek back towards another UFC light heavyweight title shot.

After his disheartening third round submission loss to champion Daniel Cormier in the main event of May 23’s UFC 187, the top-ranked “Rumble” was set to fight lesser-known No. 12-ranked competitor Jan Blachowicz on the main card of September 5’s UFC 191 pay-per-view (PPV) from Las Vegas, Nevada, when there were no other legitimate contenders left for the South Florida based slugger.

But news otherwise arose today (Thurs., July 30, 2015) from ESPN.com that Johnson would instead take on No. 7-ranked Jimi Manuwa in a battle of dangerous knockout artists.

The British “Poster Boy” actually beat Blachowicz by unanimous decision at April 11’s UFC Fight Night 64 from Poland, but it was soon revealed that he had a serious knee injury. However, Manuwa was medically cleared recently according to a UFC official and will thus return to take on arguably his biggest-ever challenge in “Rumble.”

Featuring a flyweight title rematch between Demetrious Johnson and John Dodson, UFC 191 will take place at the MGM Grand Garden Arena. A crucial heavyweight showdown between Andrei Arlovski and Frank Mir has also been targeted for the event.