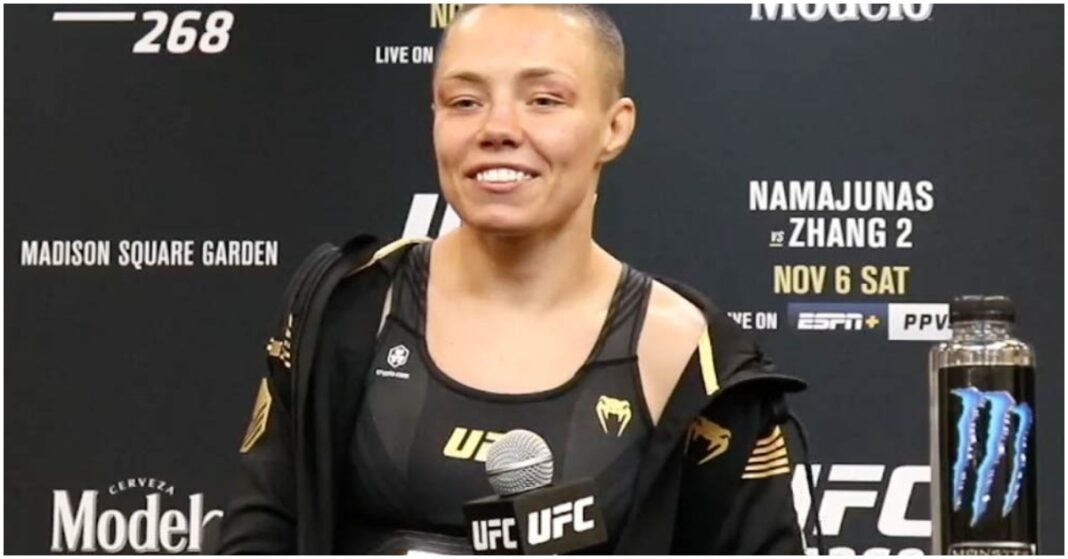 Rose Namajunas expects her next strawweight title defence to come against Carla Esparza.

‘Thug Rose’ defended her 115lb title after a close five-round fight with Weili Zhang in the UFC 268 co-main event this past weekend after KO’ing the Chinese fighter inside one round earlier this year.

Esparza, who is on a five-fight win streak and can consider herself unlucky to have missed out on facing Namajunas at UFC 268, was quick to take to social media post-fight to congratulate the champ on her hard-fought victory.

“Congratulations @rosenamajunas on a fantastic victory!” Esparza wrote on her Instagram. “Inspiring to so many and I am truly happy for you 🙏🏼 Fate had us cross paths when we created this division and I’m proud that 7 years later we are both still here at the top of it.”

Esparza become the inaugural strawweight UFC champion when she picked up a third-round submission win over Namajunas in 2014. ‘The Cookie Monster’ appears to be next in line for a shot at 115lb gold but Dana White seems to have someone else in mind as Namajunas’ next opponent.

“We have an option,” White said at the UFC 268 post-fight presser. “You don’t sit around and wait for fights, it’s a really bad idea.”

“I don’t see anything else [that] makes sense,” Namajunas said Monday on The MMA Hour.

The 29-year-old insists she has no ill-will towards Esparza and is looking forward to rematching her purely for the sake of competition.

“I think she’s going to give it all she’s got,” Namajunas said. “Before I said Weili is for sure the most dangerous threat right now, just because of the tools that she possessed. Now, after that, Carla’s for sure going to be the most dangerous opponent right this second because of where she’s at, her last performance and all this stuff, and she’s going to be very motivated to try – she’s fought for a long time.

“I would imagine that she’s going to be pretty motivated for this huge opportunity. So that is something that really excites me and interests me more now than it was before.”

Should Carla Esparza get the next crack at Rose Namajunas?