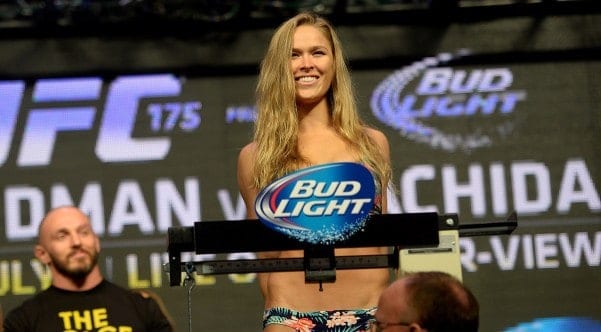 With three straight brutal finishes totaling 96 seconds, undefeated UFC women’s bantamweight champion Ronda Rousey has been so dominant that talk has foolishly shifted to her potentially facing men in the Octagon.

The discussion was revved up when Rousey destroyed consensus no. 1 contender Cat Zingano in the main event of February 28’s UFC 184, and commentator Joe Rogan poured a gallon of gasoline on the fire by vehemently claiming Rousey could ‘destroy 50 percent of the male bantamweights in the UFC.’

Rousey did little to put out the flames by saying she would give herself a fair chance against anyone in the world, but she soon cooled down the talk by announcing that her fighting male competitors just wasn’t a reality.

However, apparently she’s not willing to let the discussion dissipate just yet. Rousey recently appeared in a Q&A session for The Wall Street Journal in Los Angeles (via MMA Fighting), and she was asked who her dream opponent, male or female, would be. Her response may or may not surprise you:

“Dream world like skills-wise or annoying me-wise?” Rousey asked the fan. “Does size count? Could we just go from anybody’s skills? Like dream match. Skills-wise, I would love to see where I would go with [former light heavyweight champion] Jon Jones because he’s the one most able to improvise within a match, which is something I really pride myself on. I think we’d do some crazy ninja stuff.”

Something that probably won’t surprise you is that Rousey snuck in the obvious fact that she’d love to face hated male bantamweight and Miesha Tate arm candy Bryan Caraway, whom she thinks is causing ‘Cupcake’ to just be a terrible person:

“And then Bryan Caraway’s really annoying. It would be fun to beat him up, but plenty of other people have gotten that pleasure before me, apparently.”

Frequently asked about a litany of off-the-wall and highly speculative topics, it appears that the talk of Rousey fighting men just won’t end. Jones is obviously suspended indefinitely while he sorts out his legal troubles following a felony hit-and-run arrest, and it’s hard to imagine even Rousey giving him any trouble with a 70-pound weight disadvantage.