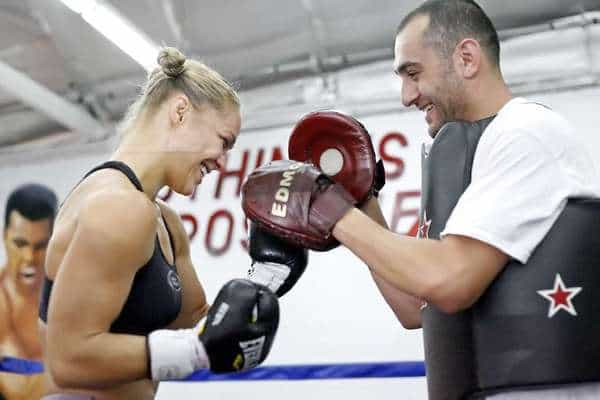 The queen of the UFC bantamweights and undisputed ruler of this year’s PPV numbers, Ronda Rousey is always looking to break the mould. She went from a young Olympic Judo phenom, to the deadliest female UFC star on the roster, and has branched out in to Hollywood movies in her spare time. All of this, and Rousey admits her time in MMA is running out.

With an inevitable retirement all depending on how tough her next few fights are, are we on the brink of saying farewell to one of the most dominant athletes ever? Perhaps from the UFC octagon, but not from combat sports all together. During the UFC 193 media day, promoting her upcoming title defense against Holly Holm, ‘Rowdy’ said she’s looking to get in to the boxing world soon. Check out the quotes courtesy of MMAFighting.com:

Rousey’s hand speed and power against Bethe Correia are a far cry from the clumsy boxing we saw in the old Strikeforce and early UFC days for the champ. A lot of credit can be given to her trainer Edmond Tarverdyan, who has brought her stand up striking along light years at the Glendale training facility.

Oscar De La Hoya, former world champion and current boxing promoter, chimed in with his opinion, and says that he’s discussed in depth the possibility of Rousey boxing in the future, and things are looking good:

“We have something brewing and this is obviously the beginning,” De La Hoya said. “It’s created a lot of big buzz within the boxing industry. Mission accomplished.”

“We’ve discussed it and whenever she’s ready to step into the ring as a fighter, as a boxer, then obviously Golden Boy Promotions will be right there with her,” he said. … “She’s tough. She’s really good. Speed, power and instinct, which is very important. She dares to be great. That’s the difference between her and a lot of fighters.”