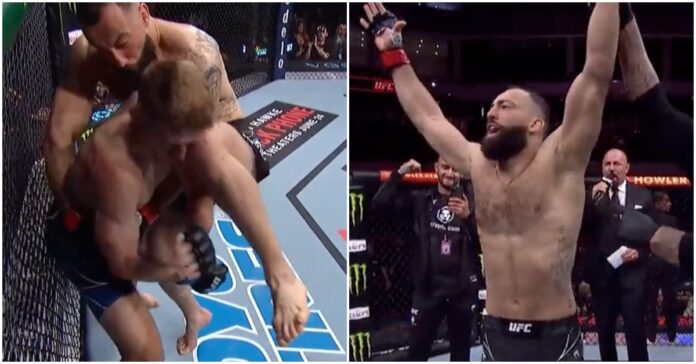 Roman Dolidze got UFC Austin off to bang with a brutal first-round finish over an experienced and talented opponent in Kyle Daukaus.

After receiving criticism in his previous bout for an overly wrestling-heavy approach, Dolidze went out looking for blood. After a clash of heads caused a slight pause in the action, Dolidze quickly turned on the heat. The Georgian-born middleweight dropped Daukaus with a quick flurry, and he immediately followed him to the mat.

Whilst Daukaus was initially able to survive, and even managed to climb to his feet with the aid of the cage, Dolidze simply used it to set up a brutal finishing strike. While pinning Daukaus against the cage, Dolidze threw a knee that landed clean on the head of Daukaus, instantly sending him sprawling to the canvas.

Below, check out the highlights of Roman Dolidze’s first-round finish of Kyle Daukaus at UFC Austin: