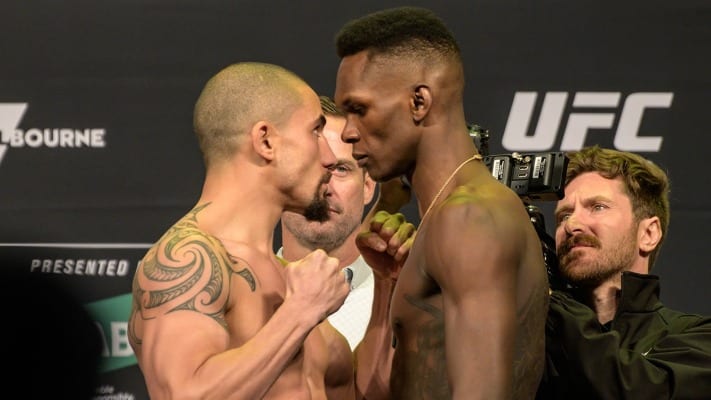 Following his dominant victory in the UFCVegas24 main event against Kelvin Gastelum, former UFC Middleweight champion Robert Whittaker has called for a title shot against Israel Adesanya in New Zealand later in the year.

During the post-fight press conference, Whittaker was asked about what would be next and if he planned on calling for the title shot rematch against Adesanya.

“After the win, everyone is calling for it for me,” Whittaker said. “That’s kind of always how I’ve taken to the approach of fighting, if you beat them all then you’re eventually at the top it’s a simple path.”

“There is no fight that makes sense for me other than that title shot and that’s the shot that and I want and I’m getting.”

“I think the borders in New Zealand are the best they’ve ever been so I think in September we can get a packed-out stadium there and just once again pump the industry down there and MMA as a whole.”

The former UFC Middleweight champion lost his title in October of 2019 at UFC 243 in Melbourne, Australia. Since then, Whittaker has remained the number one contender taking out three prospects back to back, Darren Till, Jared Cannonier, and Kelvin Gastelum.

Following his last victory, UFC President Dana White shared that Whittaker didn’t want the rematch with Adesanya, a statement that Whittaker was quick to dispute.

Despite this, at the post-fight press conference, Yahoo Sports Kevin Iole shared that he had texted with White and that he agreed the rematch with Adesanya makes sense next.

Since the fight, Adesanya first shared his immediate thoughts in tweet before elaborating further on Robs “callout” after his victory.

“Lol mans actually made me laugh with his response. Fr tho not behd, gud soize.”

Do you think Whittaker vs Adesanya II is the fight to make next?