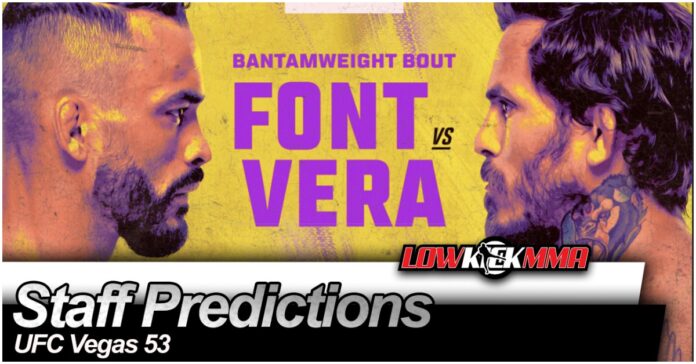 The upcoming headline fight of UFC Vegas 53 features a bantamweight clash between Rob Font and Marlon ‘Chito’ Vera. The fight promises to be an action-packed striking affair, with both men known for their durability and kickboxing prowess.

Rob Font goes into this fight as the bookie’s favourite to win, but Marlon Vera has built a career on defying the odds. Who will pick up the win and take that next step towards title contention? Let’s see what the LowKickMMA staff have to say:

Rob Font and Marlon Vera are elite bantamweights who both have the potential to be future title challengers, regardless of how this bout plays out. However, in this fight, I believe that the jab of Font will be the great equalizer. Vera will not have an answer to the preferred strike of Font, especially in the mid-range. This, paired with Font’s exceptional ability to build off the jab, makes it hard to predict any outcome than a Rob Font victory, most likely by decision due to Vera’s toughness.

If you’re in agreement, then syndicate casino reviews is the ideal platform to place some money on the New England Cartel prospect.

Top-level competition between both Rob Font and Marlon Vera is something both men share in abundance – particularly in the last 24 months, with varying degrees of success. Font, who to the consensus, appears to have the higher ceiling when compared with Ecuador native, Vera, tipped to eventually challenge for bantamweight gold despite his December falter against common-foe, Jose Aldo. Font’s ability to set a pace quite early and consistently over the course of five rounds, mixed with his boxing accuracy gives him my nod in the UFC Vegas 53 headliner.

Marlon Vera and Rob Font are expected to lay out a clinical performance at UFC Vegas 53. Both fighters share certain qualities but the biggest difference is in their approach to the game. Font being the more dominant striker of the two will like to keep the match on the feet whereas Vera might benefit from taking the fight to the ground. Font can certainly knock him out but Vera is more likely to submit him and has shown the ability to shut someone’s lights off as well. If Vera is able to take care of Font’s technical volume-based boxing, he can pull out a win by unanimous or even split decision.

I’m expecting a banger between Font and Vera. Both men are capable of leaving victorious. However, I’m predicting Font to drag this fight into deep waters and to walk away with a hard-fought, gritty win. Font’s toughness and output have always been a key factor in his success. If you look at both men’s recent losses to Jose Aldo, Font was able to show some glimmers of hope and actually out-scored Aldo in significant strikes. Vera, on the other hand, was outclassed on the feet by Aldo in the first and dominated in the third by Aldo’s grappling credentials. Vera was also losing to Frankie Edgar before scoring the knockout. Due to Vera being so hot and cold, I’m going with Font’s consistently and output to do the damage.

Guaranteed Fun in the Main Event but ultimately will end in Chito by Unanimous Decision. Both put out a high volume, but Chito’s leg kicks, I believe, will be the difference Saturday night.

I expect Rob Font to get the victory, think his striking is better than Vera’a and he’ll be able to work behind his jab well to keep ‘Chito’ out at range, see him winning via decision.

What are your predictions for Rob Font vs. Marlon Vera?