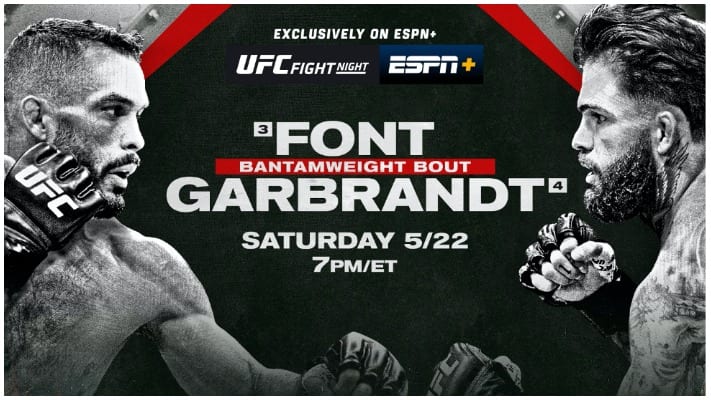 In the UFC Vegas 27 main event, we have an exciting bantamweight match-up with potential title implications as Rob Font and Cody Garbrandt square off. Who’ll win? Let’s see what the LowKickMMA writers think.

Jordan Ellis: This fight could really go either way. I can see Rob Font getting a huge KO victory. I can see the same for Cody Garbrandt. What I think will happen is the former champion will use his boxing skills to evade his opponents’ power and ultimately pick up a decision win via the judges.

Ty Rosson: This fight is one that I have been looking forward to for a long time. I have been on the Garbrandt train since he made his debut in the UFC and really think when he has his head on straight, he is the best fighter at 135. On the other side, Font has really been putting it together in his last couple of fights. His KO of Moraes in his last fight was vicious and shows that he can hang with the big dogs of the division. In terms of this fight, there is just something in my bones that won’t let pick against Garbrandt. I really think that he has put that three fight skid behind him and came out a much smarter and calmer fighter because of it. I am going Garbrandt via third round KO.

Alex Lough: I’ve been on the Rob Font hype-train since he debuted with a knockout of George Roop. Injuries have limited the number of times we’ve been able to see him but, fortunately, haven’t affected his performances in the octagon. As for Garbrandt, he showed in his last fight that he still has what it takes to compete at the top of the division, not get drawn into a fire fight, and that he still has a rocket launcher of a right hand. However, he didn’t really answer whether his chin can hold up. Assuncao is far from a knockout threat and wasn’t able to land anything of note before being stopped. Font can throw a wide variety of strikes and always looks to push the pace. I can guarantee he’ll be able to catch Garbrandt with something at some point, and I still question how Cody will hold up. It’s also worth noting that Garbrandt is coming off of COVID and has gone on record that it hit him pretty hard. The fact that we don’t know how much that will affect him combined with his still questionable chin means I have to pick against him. Font by KO

Ross Markey: For me this type of fight between Rob Font and Cody Garbrandt has quite meaningful implications in regards to the title at bantamweight. Font is on the cusp with a victory, and former titleholder Garbrandt could very well sit out with a win tonight awaiting his tilt. On his day, I don’t think you’ll find a more dangerous bantamweight on the planet other than Garbrandt, and with an improved fight IQ and patience under the tutelage of Mark Henry, I’m picking him to eventually find a meaningful shot to stop Font by the second frame.