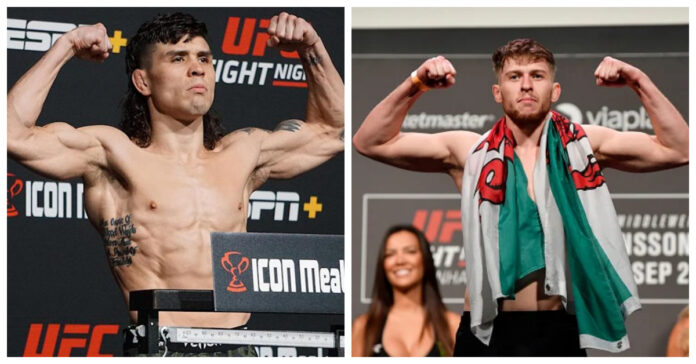 UFC bantamweight Ricky Simon has predicted a finish in his next fight against Jack Shore.

Ricky Simon will face off against Jack Shore this July 16 at UFC on ABC 3 – Ortega vs. Rodriguez in New York. Simon is coming off an incredible knockout win over the veteran Raphael Assuncao in his most recent outing last December.

Shore goes into the bout undefeated in 16 fights with five of them coming under the UFC banner. Simon will be looking to extend his win streak to five and hand Shore the first loss of his professional career.

In an interview with LowKick MMA, Ricky Simon predicted a finish for the fight with the use of his American-style wrestling. The 29-year-old Washington native spoke about how he feels more confident inside the octagon having gained more experience with time. His aim has evolved to not just win but to score a bonus as well.

When probed whether Shore’s unblemished record impacts him mentally, Simon remained confident he will be the one to beat ‘Tank’.

READ MORE:  Darren Till thinks Conor McGregor's career is coming to a close: "It’s probably the end for Conor."

“The prediction for the fight is Imma use my good old American wrestling and Imma control where the fight goes and Imma keep these finishes coming. I just got a knockout over a legend of the division, Raphael Assuncao. I’m so comfortable in there now I feel, the finishes are going to keep coming.”

UFC on ABC 3 headlined by Brian Ortega vs. Yair Rodriguez

Brian Ortega and Yair Rodriguez are set to square off in the main event of the July 16th card in Elmont, New York. The event marks the third UFC broadcast on ABC’s broadcast television network. With divisional champion Alexander Volkanovski scheduled to take on Max Holloway a third time for UFC 276 this July 2, Ortega and Rodriguez will look to edge over one another in a bid to get a title shot.

Both headliners are in the top five of UFC lightweight rankings. Their bout will likely serve as an eliminator contest to set up a fight with the winner of Volkanovski vs. Holloway 3. Ortega is a former title challenger who came close to snatching the gold from ‘The Great’ at UFC 266 last September.

Do you think Ricky Simon will hand Jack Shore the first loss of his career?