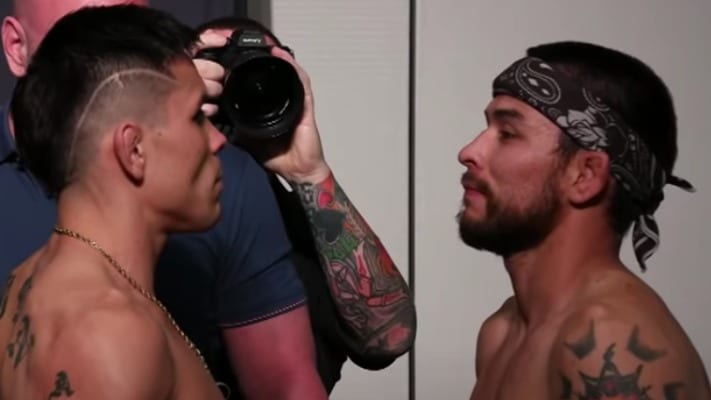 Next up on the UFC Jacksonville main card is a bantamweight tilt between Ricky Simon and Ray Borg.

Round 1: Both fighters begin swinging. Simon lands a big takedown in response and starts digging Borg’s body. Borg gets up and looks for his own takedown but Simon defends well and reverses with Borg up against the fence. Borg goes down but gets up soon after and they return to striking. They exchange leg kicks. Simon gets another takedown soon after and remains on top for much longer as the round comes to an end.

Round 2: They strike again before Simon goes for the takedown yet again. Borg goes down but gets up soon after. Simon attempts another takedown soon after but Borg defends it this time. Simon is the more active and comfortable fighter in this fight so far. Borg lands a nice combination. Simon goes for a takedown. Borg rolls but remains controlled by Simon. Borg scrambles and they’re back to their feet. Borg lands another big combo with a nice body shot. The round comes to an end.

Round 3: We return to the bantamweights striking. Borg is looking much more comfortable and lands two big liver shots. Simon times a takedown well and keeps Borg down for some time. Borg gets up but Simon continues to control him. Simon lands an elbow which gets a smile out of Borg as they separate. Borg lands a big head kick but Simon eats it. They end the round swinging but this looks like a win for Simon.