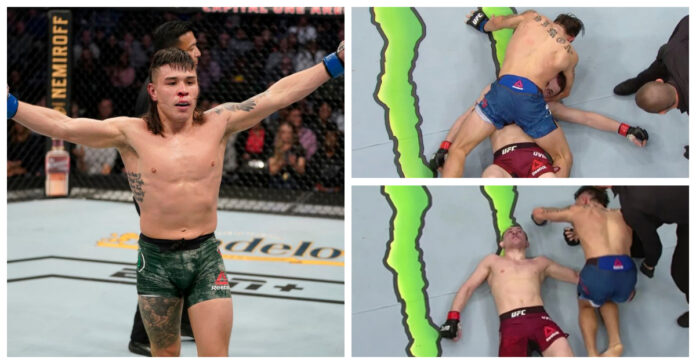 UFC bantamweight Ricky Simon is confident he can break Merab Dvalishvili’s win streak in the UFC.

Ricky Simon is scheduled to take on Jack Shore this July 16 at UFC on ABC 3 – Ortega vs. Rodriguez in New York. Simon is coming off an incredible knockout win over the veteran Raphael Assuncao in his most recent outing last December.

Shore goes into the bout undefeated in 16 fights with five of them coming under the UFC banner. Simon will be looking to extend his win streak to five and hand Shore the first loss of his professional career. A win over Shore will give Simon the extra push he needs to be matched up with a higher-ranked opponent, someone in the top five or ten.

Ricky Simon is open to Merab rematch after Jack Shore

Merab Dvalishvili, the sixth-ranked contender at 135-lbs, received major backing from the reigning UFC Bantamweight king Aljamain Sterling, who believes ‘The Machine’ to be a future champion and plans to move up to featherweight once Merab is knocking at the door of a title shot.

Merab has racked up a seven-fight win streak that saw him knockout Marlon Moraes in his most recent bout. The Georgian also has the chance to create history by becoming the first UFC champion from the area. As more people pay attention to the rising 31-year-old, Simon sees a familiar foe he already beat four years ago in April 2018.

Simon took on Merab at UFC Fight Night 128 and managed to come out on top with a first of its kind technical submission stoppage that was awarded after the final bell.

In an interview with LowKick MMA, Ricky Simon shared his thoughts on whether a rematch with Merab would get him closer to the title.

Ricky Simon believes it would be a fun match for the fans and is looking to get the opportunity after Shore.

“Definitely, I think that’d be a very exciting fight as well,” said Simon. “He hasn’t lost since I beat him, I believe he’s on a seven-fight win streak, ranked number six in the world, and here I am in the back of the top 15 just having to fight whoever’s but I think I’m better, I beat him, I think I have more talent than a lot of these guys in the division. I think I’m going to go out there, I’m going to beat an undefeated kid, and then Imma get opportunities like a rematch with Merab.”

While he acknowledged Merab’s abilities, Simon said that Merab should want a rematch more than he does since he should be looking to avenge his loss.

“I don’t really care if we have a rematch or not,” he said. “I feel like he would want that more than I should want it but it’s just at the point where I kinda feel like we both always knew that we might end up fighting each other again and it’s a possibility but like you said that bantamweight division is so rich right now, there’s so many fun matchups that can be made. I’m excited to see what’s going to happen, for this fight and after.”

Do you want to see Ricky Simon rematch Merab Dvalishvili at some point in the future?