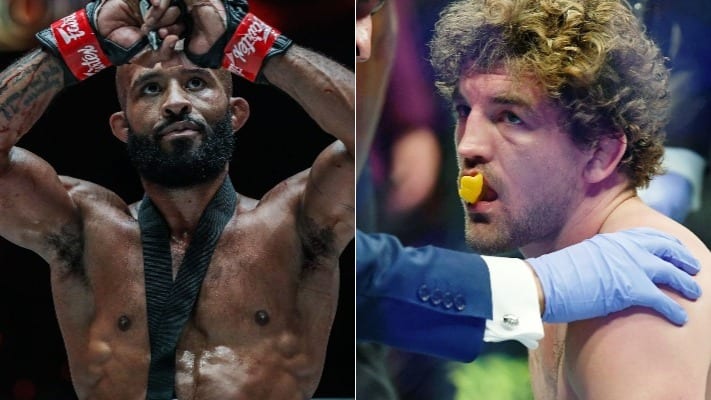 The Ben Askren-Demetrious Johnson was still worth the investment for both sides according to ONE Championship vice president Rich Franklin.

The pair were traded in MMA’s first-ever trade last year with Askren going to the UFC while Johnson went to ONE Championship. “Mighty Mouse” has so far registered three wins and recently became the ONE flyweight grand prix champion.

Askren, on the other hand, is 1-2 with the promotion and most recently was submitted by Demian Maia at UFC Singapore last month. It led many to question why the UFC even trade a pound-for-pound great in Johnson for Askren.

UFC president Dana White, however, would later defend the trade and Franklin is the latest to do so:

“It was a pretty straight forward trade from the business side,” Franklin told MMA Junkie. “Just kind of flip-flopped from one organization to the next, and so nothing tricky about it. And I’ll say this: Askren goes to the UFC, he’s competing against some of the top level guys obviously with Masvidal and what not, and then DJ comes over to ONE Championship and is competing against some of the top guys.

“People will make a comment like that based on athlete’s performance, but the reality, what you have to ask yourself: What kind of return on investment did the organization get on the trade?”

Of course, Johnson never resonated with the American audience and struggled to sell pay-per-views. Askren, meanwhile, has been a very popular fighter since his arrival due to his trash talking which has stirred up interests in his fight.

Those factors lead Franklin to believe both promotions got their worth:

“DJ, for us, who maybe didn’t get the respect that he deserved in another organization, is going to do really well over here in ONE Championship,” Franklin explained. “There are many fans on this side of the planet that gravitate towards the smaller athletes, and he puts on exciting matches. There’s no doubt about that, so for us, regardless if he’s winning or losing, that’s not as important as he’s a big draw.

“”And likewise for Ben Askren moving to the UFC. Regardless of whether he’s winning or losing, he’s a big draw because people are going to be curious. Even though he lost his last match to Demian Maia, when they find him for another match, people are still going to be interested in seeing how he performs. To see if, ‘Oh, maybe he had a rough start out of the gates or whatever,’ so they’re still getting a return on investment in that respect, and I think it was probably smart for both organizations because the UFC wasn’t getting a return on investment in Demetrious.”

Do you agree with Franklin?