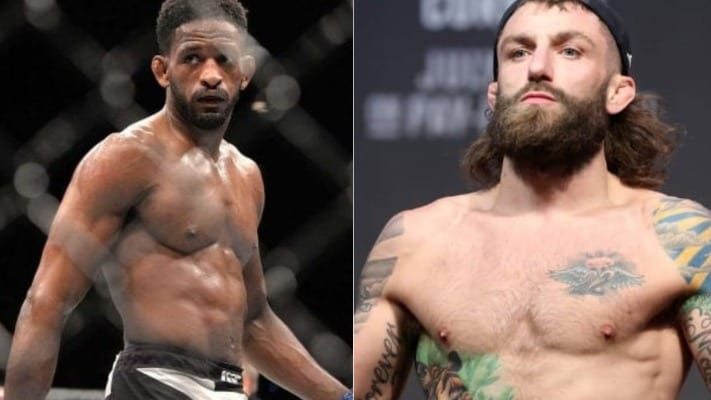 A ranked welterweight bout between Michael Chiesa and Neil Magny is in the works.

That’s according to ESPN’s Brett Okamoto who reported Tuesday that it’s been agreed for the January 20 Fight Island card. That event, of course, is headlined by a welterweight bout between Leon Edwards and Khamzat Chimaev.

Should anything happen to either competitor in the main event, one of Chiesa or Magny would seemingly fill in.

“Per sources, Michael Chiesa (@MikeMav22) vs. Neil Magny (@NeilMagny) has been agreed to for the Jan. 20 Fight Island card. One of these two could presumably serve as a backup to that Edwards/Chimaev main event.”

Chiesa is undefeated since moving up to welterweight in 2018. He is currently on a three-fight winning streak which includes wins over Carlos Condit, Diego Sanchez and Rafael dos Anjos. Following his win over Dos Anjos, Chiesa called for a fight with Colby Covington.

However, he will have to make do with the red-hot Magny who is also on a three-fight winning streak. The 33-year-old is coming off impressive unanimous decision victories over the likes of Li Jingliang, Anthony Rocco Martin and former champion Robbie Lawler.

Magny had long called for a fight with Chimaev but will instead get a ranked opponent in Chiesa who is currently one spot above him at No. 8 in the welterweight rankings.

The winner will likely find themselves on the brink of title contention.

Who do you have winning this contest?