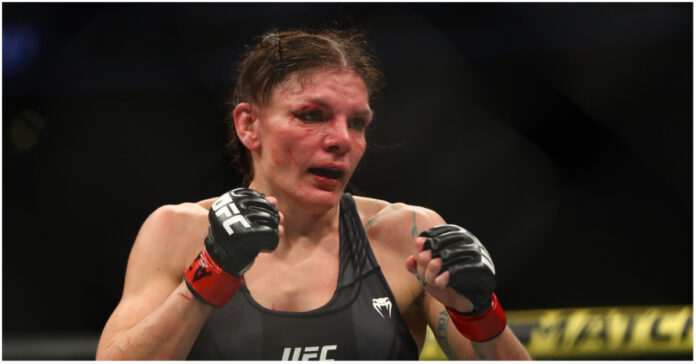 Lauren Murphy is out of her flyweight bout against Miesha Tate scheduled to take place on the main card of UFC 276.

Per a report from the broadcast of UFC Fight Night: Tsarukyan vs. Gamrot, Lauren Murphy was forced to pull out of the fight for a currently undisclosed reason. She was set to face off against former bantamweight champion Miesha Tate, who was making the move down to 115lbs.

MMA journalist Ariel Helwani has since revealed that it appears unlikely that the UFC will find a short-notice replacement for Tate.

Helwani posted the following to his Twitter account: “Lauren Murphy x Miesha Tate is canceled, per the broadcast. I’m told it’s an issue with Murphy. No word on what they’ll do with Tate yet.”

“Not looking great to find a super late replacement for Tate, I’m told. Was a big one for her, flyweight debut.”

It is unclear if the UFC will attempt to rebook the matchup when Murhpy is fight ready again, or if they will look for new opponents for both women. Miesha Tate will undoubtedly feel incredibly aggrieved that the matchup is not taking place, as she had been vocal about the changes she has had to make to her lifestyle in order to cut down in weight.

Would you like the UFC to rebook Miesha Tate vs. Lauren Murphy?