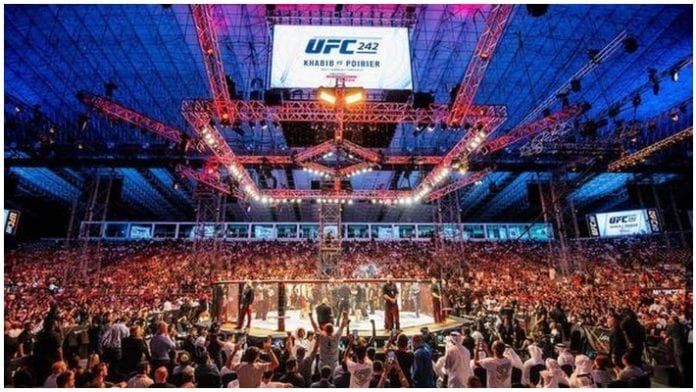 Dana White’s ‘Fight Island’ is located in Abu Dhabi according to a new report from Combate. The report claims the UFC are preparing to set up shop in the capital city of the United Arab Emirates which has been the home of several past UFC cards. The most recent being UFC 242 in September 2019 which took place on Yas Iland and saw Khabib Nuramgomedov defeat Dustin Poirier inside three rounds.

The report from Combate also claims the UFC is actually set to begin hosting events from ‘Fight Island’ on June 27 and will conclude the use of the purposefully built facility at the end of July.

Speaking to TMZ on Friday the UFC boss contradicted this report when revealing the promotion will begin hosting events from the mysterious ‘Fight Island’ next month – the first being UFC 251 on July 11.

“Here’s a big problem that is going on right now. The fantasy of Fight Island. I’m very worried it will eclipse the reality of Fight Island. The fighters are not going to walk out lined up with tiki torches on the side. I will not be sitting in a big thrown overseeing the octagon and watching the fight.”

“We actually have an arena. We built a little arena there that’s very, very cool. We are going to have a little training facility were the fighters can train and he fighters will have their own private places to train due to COVID-19 and, there will be an octagon on the beach too!”