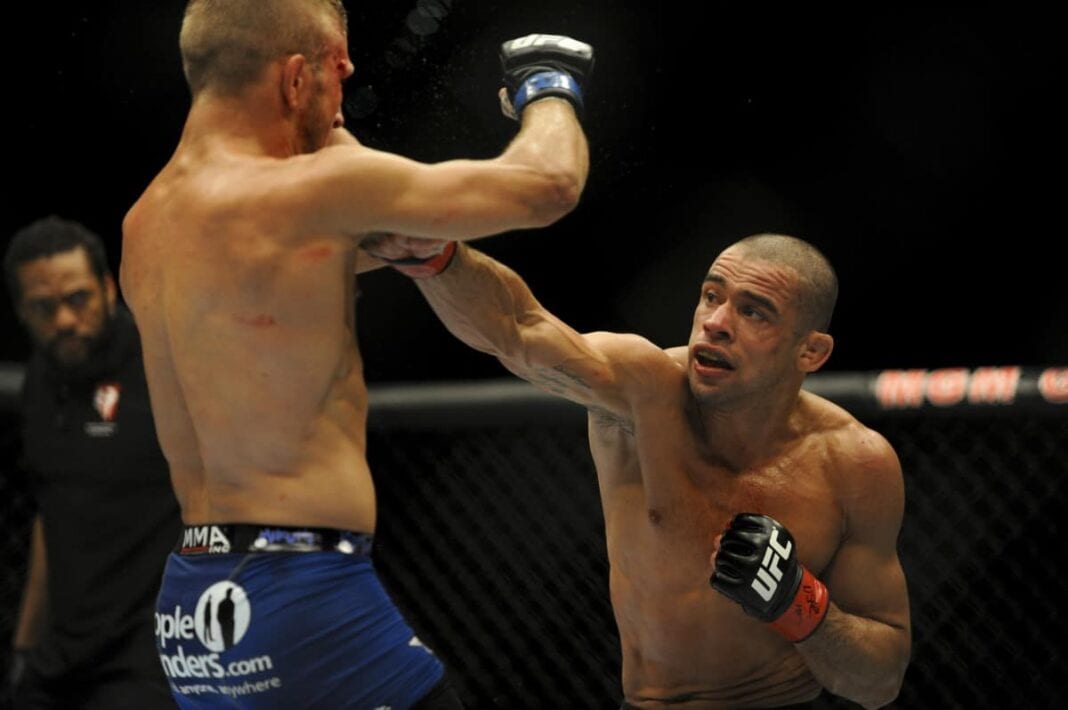 Former bantamweight champion Renan “The Baron” Barao was being called one of the greatest fighters on the planet, and Dana White even said that he believed Barao could be the pound-for-pound king, but things quickly changed when the ex-champ met TJ Dillashaw at UFC 173 in May 2014.

Dillashaw, who was a relative unknown at the time, shocked the world and the odds makers, absolutely destroying Barao over five-rounds in one of the biggest upsets of all-time, scoring a late finish and stealing the belt.

The two have since had a rocky road to a rematch, as they were originally set to meet at last August’s UFC 177, but Barao fell ill on weigh-in day, and was forced to withdraw from the bout. The rematch was then set for April’s UFC 186, but this time Dillashaw suffered a rib injury and had to pull out.

Now, the two will finally meet again, as they are scheduled to throw down in the main event of this Saturday’s (July 25, 2015) UFC on FOX 16 in Chicago. Despite getting brutally beaten in the first matchup, it seems as if Barao is still very confident heading into this weekend’s card.

Speaking with MMAJunkie, the Brazilian stated that he’s going to beat “Killashaw” this time, and he expects a trilogy match when he does:

“I think it would be fair and that the UFC will decide to go for the third time with Dillashaw,” Barao said through an interpreter. “T.J. beat me the first time, I’m going to beat T.J. this time, so I can’t think of anyone else besides him.”

As far as the fight getting pushed back from April after the champion got hurt, Barao said that his training camp at that time was going great, but those kind of things happen, and he’s even better now:

“We were doing an excellent job in the training at that time, but I’m even better right now,” Barao said. “That kind of thing happens. As he got hurt, many other fighters got hurt. I was disappointed because it was an excellent camp and excellent training, but now I feel even better.”

At the time when the two first met, Barao was riding an insane 32-fight win streak, and seemed to be absolutely invincible. That proved to be untrue of course, but “The Baron” says that everything happened at the right time, and now he’s just focused on fighting Dillashaw, and getting his belt back:

At the end of the day, the ex-boss said that everyone knows his style, and that he’s going out there and looking for a finish:

“Everyone knows my style; I want to finish this fight as soon as possible,” Barao said. “I’m going to knock out or just submit him.”

It definitely seems as if Barao is in the right state of mind heading into this rematch, but can he get the job done and get revenge on the Team Alpha Male champion?