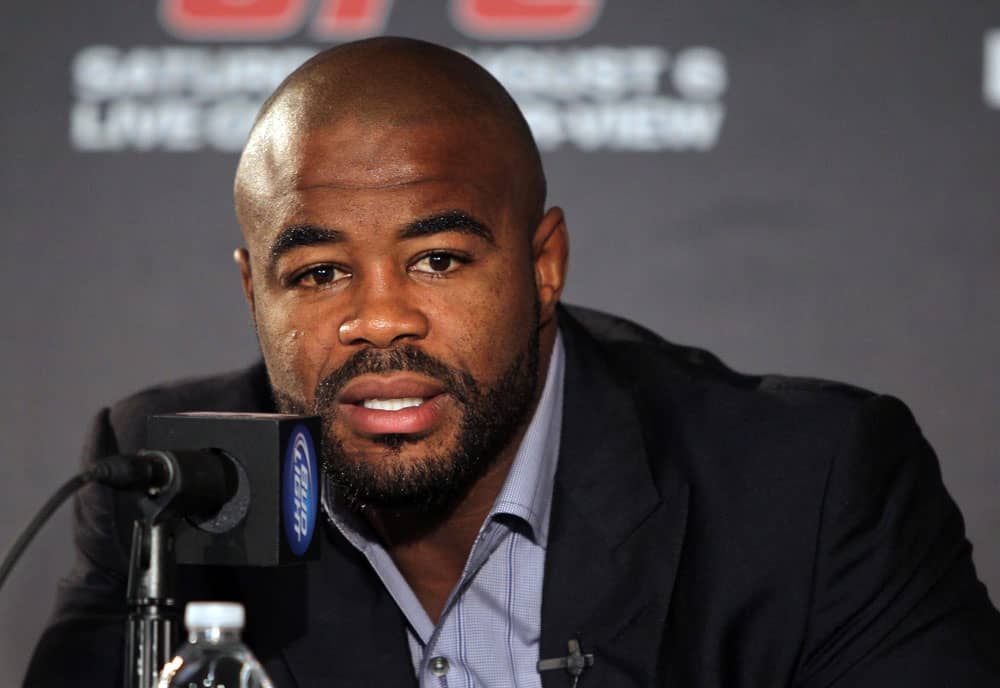 Former light heavyweight champ Quinton “Rampage” Jackson may have got back into the UFC win column with a decision victory over Fabio Maldonado in the co-main event of last night’s (Sat., April 25, 2015) UFC 186, but one of his most bitter former foes wasn’t convinced that he’s back to being a top contender.

As part of the FOX Sports 1 post-fight show, fellow former light heavyweight champ Rashad Evans said he believed that, based on Rampage’s performance at UFC 186, he would have Jackson on the wrong end of a highlight reel finish when he finally returns from the knee injury that’s kept him out since November 2013:

“I would definitely give ‘Rampage’ a rematch. That’s a fight I’d really like to have. He came out there, he kind of looked alright. He had some things going on, so I’ll give him the benefit of the doubt. But I’ll tell you what. If that ‘Rampage’ gets in front of me, woo, I’m gonna put a highlight reel knock out on him.”

A longtime vet who’s seen it all, Evans handed Jackson a decision loss in the main event of 2010’s UFC 114, a bout that had some of the most trash talk-fueled hype in UFC history. But it also largely failed to deliver on that hype, and some of that could be attributed to Rampage getting away from the power wrestling style that made him famous in Pride FC. According to Evans, a return to that strategy will be necessary for Rampage to contend in his UFC return:

“I think Rampage needs to get back to the old Rampage, picking people up and slamming them. That’s how he’s gonna be a contender, to really break into the top five and to be a threat in this weight class.”

Evans hurt his ACL training for his scheduled match-up with Daniel Cormier at February 2014’s UFC 170, and re-aggravated the injury trying to come back too early last December in an attempt to fight Glover Teixeira in Brazil. He’s currently taking his time healing up for a return, and he’s kind of in limbo in his division right now.

“Suga’s” good friend and Blackzilians teammate Anthony “Rumble” Johnson will square with Evans’ former protégé and bitter enemy Jon Jones for the belt in the main event of May’s UFC 187. He’s repeatedly said that he won’t fight “Rumble” if he wins, and he doesn’t have the current resume to warrant a rematch with “Bones” if the longtime champ retains.

A bout with Rampage, who will re-debut on the official UFC rankings tomorrow, could help Evans get back to his once elite form. It should still be several months before Evans returns. Should he face Rampage when he does?