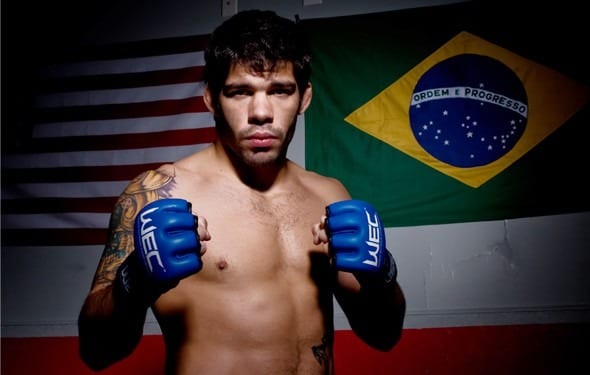 The bantamweight division has taken some big hits as of late. Current champion TJ “The Viper” Dillashaw was supposed to take on former champ Dominick Cruz at some point this year, until “The Dominator” suffered yet another unfortunate injury. Right after the news broke that Cruz was hurt, it was reported that the next likely contender, Raphael Assuncao, who is riding an impressive seven-fight win streak, was also injured.

Just 12 days ago, it was announced that Assuncao would be healthy by March, and was slated to take on long time contender, “The California Kid” Urijah Faber in the main event of UFC Fight Night 62 on March 21, 2015 in Rio de Janeiro. However, today (February 2, 2015) it was confirmed by MMAFighting.com that Assuncao has been forced out of the bout.

According to sources close to the situation, the Brazilian would not be able to recover from his previous injury in time to take on “The California Kid”. Sources also said that the UFC is working on getting a replacement opponent to take on Faber on the same card.

This scheduled matchup was actually going to be a rematch, as the two men battled it out once before in 2010. The Team Alpha Male product scored a third-round submission win over Assuncao back at WEC 46.

The news that the Brazilian’s injury is more serious than previously thought hurts the 135 pound division in a way as the division is currently looking very depleted on title challengers. Dillashaw is currently set to rematch Renan Barao at UFC 186 on April 25, 2015. Some may argue that Barao doesn’t even deserve the rematch just yet, only securing one win since he was demolished by Dillashaw back at UFC 173, but with Cruz now on the sidelines for a while and Assuncao out as well, there really aren’t any other options.

The only other option would be Faber, but that is unlikely for a few reasons. First off, Faber and “The Viper” are teammates and close friends and don’t seem to want to fight each other. “The California Kid” has also lost all three of his UFC title shots. However, he has won every other fight he’s taken in the UFC and is also riding a two-fight win streak. If the former WEC champion keeps knocking off contenders, the UFC may have to give him another shot.

Will Dillashaw and Faber be forced to fight each other at some point?