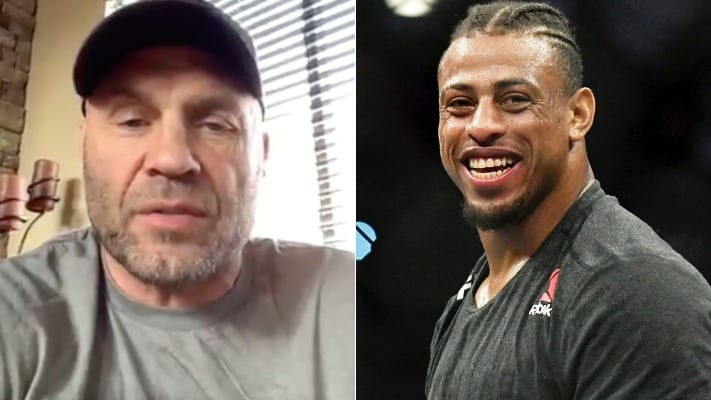 It looks like Greg Hardy received quite the pep talk before his UFC Moscow co-main event this past weekend. Hardy met Alexander Volkov in Russia on Saturday afternoon, but couldn’t get the job done, losing via decision.

Prior to the fight, however, Hardy received a Cameo video message from UFC Hall Of Famer Randy Couture, wishing Hardy good luck before his fight. Cameo is a service in which fans can buy personalized shoutout messages from their favorite celebrities.

Couture is one of several names in mixed martial arts (MMA) who provide the service. In his video, Couture wished Hardy good luck against Volkov, commended him on fighting for the fifth time this year, and joked about his previous inhaler use.

Couture is just getting over a heart attack that he suffered late last month. The incident occurred after a workout at his gym. Couture then walked himself to the hospital where he was treated immediately. He released the following statement shortly after.

“Contrary to recent rumors, I have not kicked the bucket yet,” Couture wrote. “I am alive and well. Special thanks to the amazing staff at Cedars Sinai Hospital. From the ER to cardiac ICU thanks for taking care of me.

“I’m one of those people that has crazy thick blood and nominally high bad cholesterol. Unfortunately, those 2 factors combined to create a nice clot including my diagonal artery. The (catheterization laboratory) at Cedars got right on it, cleared it out and placed a stent in its place.

“Thanks to all of you out there expressing your concern. Your love and support mean the world to me and my family. Live your lives to the fullest. You never know when you’ll draw that last breath in!”

What do you make of Couture’s good luck video to Hardy?