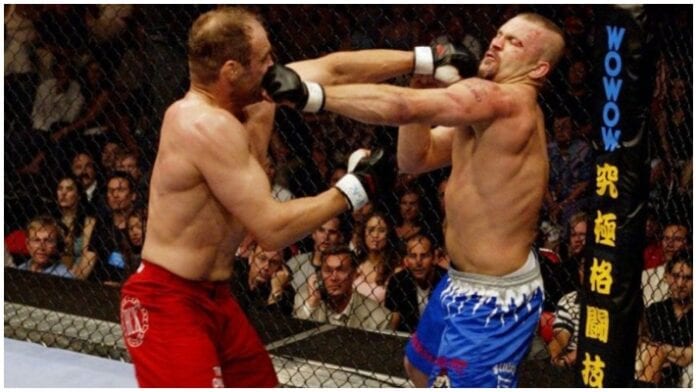 MMA legend Randy Couture has been reminiscing about the time he played spoiler by beating Chuck Liddell.

The comments come one week on from Dustin Poirier doing something similar. ‘The Diamond’ stopped Conor McGregor inside two rounds at UFC 257 to derail Dana White’s plans to set up a mega-money rematch between ‘Notorious’ and UFC lightweight champion Khabib Nurmagomedov.

Couture held the heavyweight title in 2001. He believes the UFC wasn’t happy about him beating Pedro Rizzo twice, as he was 10 years Couture’s junior and a potential future superstar.

The 57-year-old later lost his heavyweight title to Josh Barnett. Couture was scheduled to face Andrei Arlovski in 2003 before an injury to the Belarus native derailed that fight three weeks out, prompting the UFC to contact ‘The Natural’ and suggest he moves down to fight Chuck Liddell for the interim light-heavyweight title.

Liddell was on the edge of becoming a true star for the UFC. ‘The Iceman’ was engaged in a bitter feud with undisputed light-heavyweight champion Tito Ortiz. A fight between Liddell and Ortiz was the biggest possible fight the company could make. Couture believed the UFC wanted Liddell to have an interim belt in order to force Ortiz into a fight with his biggest rival.

“Obviously I was the fly in the ointment for that whole scenario,” Couture said. (Transcribed by MMA Junkie)

Couture went on to beat up and stop Chuck Liddell inside three rounds to claim the interim belt. He later picked up a decision win over Tito Ortiz to become the undisputed light-heavyweight champion. Couture believes those wins put him in “a bit of an adversarial situation” with the UFC brass.

‘The Natural’ eventually surrendered his title to Vitor Belfort before winning it back in a rematch. Couture later lost twice to Liddell in one of the all-time great trilogies before stepping up to heavyweight to win UFC gold once again, cementing his place in the Hall of Fame and as one of the greatest ever MMA fighters.

Where does Randy Couture rank among the best ever UFC fighters?