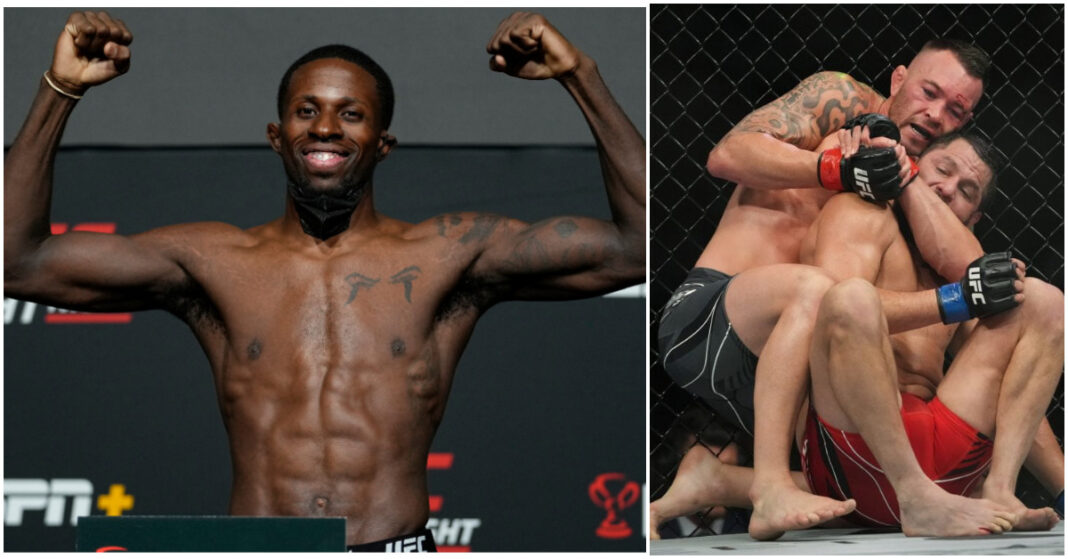 UFC welterweight Randy Brown believes that Colby Covington crossed a line against Jorge Masvidal, who rose to fame after catching Leon Edwards with a couple of dog shots backstage.

Ahead of UFC 274 on May 7, Randy Brown spoke to LowKick MMA about his upcoming fight with Kalinn Williams and the potential of the winner breaking into the rankings. After soundly beating Alex Oliveira via a rear-naked choke to mark his submission win in the first round, “Rude Boy” defeated Jared Gooden by unanimous decision last year.

Brown will take on “Khaos” as he hopes to “get it done” and extend his win streak to three. On being probed about a potential rematch with Vicente Luque or Belal Muhammad, both of whom he has faced in his career, Brown suggested that he needs a few more wins and is confident that he’ll see them again in the ring at some point in the future.

Talking about the reported physical altercation that took place between Colby Covington and Jorge Masvidal, Brown explained how there is a line in promoting and clarified a tweet on the incident he had posted earlier.

“My tweet got misconstrued a little bit but that’s naturally Twitter, that’s what Twitter does,” Brown said. “For me, I just say ‘hey, I think we should kinda keep the same energy across the board no matter what the situation is if you like somebody or not like somebody.'”

The star of Jorge Masvidal began to rise following an incident that happened post-fight backstage in 2019. As Masvidal was being interviewed after his knockout win over Darren Till, Edwards exchanged some words with ‘Gamebred’ that led him to walk up to Edwards and sucker punch him.

Masvidal’s stock rose sharply upwards as he was labeled to be the cool guy who handed Edwards the infamous three-piece and a soda, a euphemism for the sucker punches he landed on the Jamaican-English fighter.

Randy Brown made a very good point of keeping the same energy across the board whether you like someone or not. If it was cool when it happened to Edwards, then it should be cool that it happened to Colby Covington.

“Because when Leon (Edwards) got sucker-punched, right? It was three-piece and a soda, right?. It was cool and t-shirts were being sold and it was all funny, right?

“And then when it happens to Colby, a person that is known for crossing certain lines and known for saying you know stuff. His fans come to his aid and they’re like, ‘oh, you know, this guy, charges should be pressed against him’.”

He also commented on the fact that social media may have given people a false sense of reality as he reinforced the idea that words do have consequences.

“But at the end of the day, you can’t go around saying what you want to say and feel like there’s no consequences. You can’t talk about street shit and cross certain lines and then when it comes back to you in the street, you’re just like ‘there’s no consequences’. That’s not the real world, that’s not how things work. We have this warped sense of reality now with the internet and stuff, that’s just not how things work.”

Do you agree with Randy Brown’s take on the matter? Will he beat ‘Khaos’ Williams this May 7?