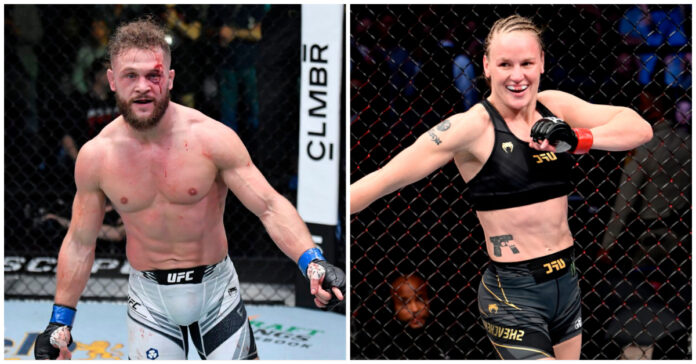 Tiger Muay Thai coach Rafael Fiziev will mark his return to competition against Rafael dos Anjos this Saturday at UFC on ESPN 39. The two were initially scheduled to face each other earlier in March but Fiziev was forced to pull out after contracting COVID. Renato “Moicano” Carneiro was found as the short-notice replacement for Dos Anjos, who dominated his way to victory.

Ahead of his clash with dos Anjos, Fiziev recounted an intriguing tale from the past.

In an appearance on The MMA Hour with Ariel Helwani, Rafael Fiziev shared that he was twelve years old when he fought for the first time in Muay Thai against an opponent who was about 18 or 19.

He went on to reveal that fellow Kyrgyzstani and the current UFC women’s flyweight champion and pound-for-pound queen Valentina Shevchenko was the referee for that bout. “Valentina refereed this fight,” Fiziev said. “Yeah, she was the referee in my first fight. She’s a good referee, she put her fingers in my mouth when she tried to separate us.”

When asked why he thought she put her fingers in his mouth, Fiziev said, “I don’t know why. Because we fight like dogs maybe. I remember her finger in my mouth and she put it like (a fishhook). She had gloves.”

“Ataman” has developed a reputation for his lethal striking abilities and holds a prolific standing as a coach at one of the most reputable gyms in Thailand. A video of Fiziev’s incredibly sharp defense displaying him dodging high kicks like he’s in The Matrix did rounds online.

When Conor McGregor stumbled upon the clip, he was far from pleased and suggested a counter move to demolish the technique. Fiziev responded quickly stating that McGregor was in a “fantasy world” and that his recommendation wouldn’t hold up in reality. He further extended an invitation to “Notorious” to train together with him.

The Irish superstar reiterated his stance and accepted the invitation for the next time he’s in Thailand. Although their argument appeared to be heated with a healthy bit of disrespect it seems like the two are simply stating their opinions without actual malice towards one another.