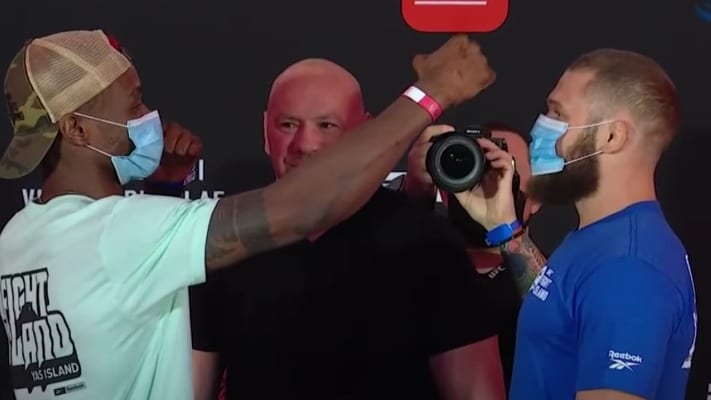 Next up on the UFC Fight Island 2 main card is a lightweight bout between Marc Diakiese and Rafael Fiziev.

Round 2: The fight returns with striking again. Fiziev continues with the body kicks. Diakiese attempts a powerful head kick but Fiziev brings out the matrix and ducks his head back. Fiziev lands a body kick and follows it up with a couple of strong leg kicks. Fiziev is showing great head movement. He lands a body shot soon after and follows it up with two big leg kicks to Diakiese’s left leg. It has been all Fiziev this round. Diakiese clinches Fiziev up against the fence but they separate eventually. He continues with the leg kicks. Diakiese lands a body shot. However, it’s still all Fiziev as the round comes to an end.

Round 3: Diakiese is showing more urgency but Fiziev responds with a barrage of strikes, mainly body kicks. Diakiese clinches him up but to no major effect. Fiziev lands another body kick. Diakiese lands a big counter in what is undoubtedly his best strike of the fight. However, Fiziev remains composed and continues the onslaught. Diakiese has one minute left to find the finish. Fiziev lands a body kick. Diakiese jabs to the body. He misses a spinning wheel kick soon after. Fiziev sees his spinning backfist blocked. Diakiese attempts a flying knee that Fiziev blocks. Fiziev uses head movement to avoid strikes before landing a spinning back kick as the fight ends.