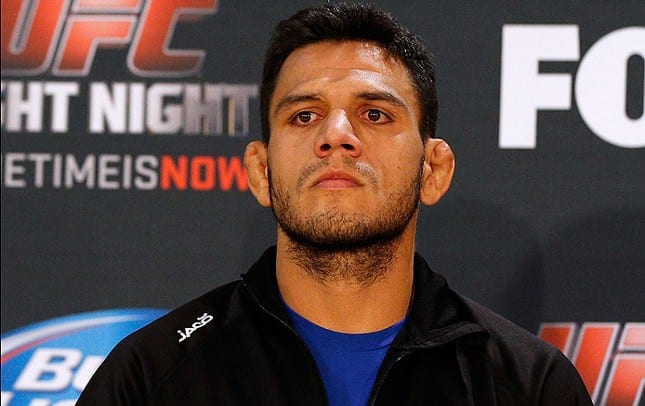 UFC interim featherweight champion Conor McGregor is the name on everybody’s lips right now. Since breaking Chad Mendes in two round at UFC 189, all the big names in divisions both above and below 145 pounds want a piece. UFC lightweight champion Rafael Dos Anjos slammed McGregor in the media after his UFC 185 title win over Anthony Pettis, claiming ‘There’s no way McGregor can beat me,’. The pairing isn’t too out of this world, as it’s well known the Irish star cuts massive weight to make 145, and had previously fought and won belts in both featherweight and lightweight in the past.

It seems the winds have stirred Dos Anjos’ trash talking yet again, as he tells press during a recent UFC media day, as captured by Guilherme Cruz of MMAFighting, that he would love to beat up the Irish sensation on his home soil:

“This guy has no chance. Aldo would destroy him,” he said. “If Chad Mendes was in shape, he would have destroyed him, he showed that. He walked right next to me and he’s too small, he looked like a chicken. Chad Mendes is strong, but McGregor has no chances. That fight really exposed who he really is. He’s that fighter.”

There has been plenty of speculation on how ‘Money’ would have fared if he’d gotten the full camp before UFC 189, but it will remain as speculation unless the two ever rematch. What is a fact is that Jose Aldo will face ‘The Notorious’ (providing there are no hiccups) later in the year, and a win could signal the beginning of a move to 155 pounds for McGregor.

“I’ve never seen Chad take a step back, he always moves forward, and he was breathing hard after the first minute,” he continued. “T.J. Dillashaw was sitting right next to me and I asked him how was Chad’s cardio when he got the call from the UFC, and he said ‘he’s well for three rounds, not five, but he’s always in shape’. But he gassed in one minute, and still beat McGregor up in the first and second rounds. But I believe McGregor is not even close to the top 5 of the division.”

The Brazilian champion knows the cardio game pretty well, as he ousted Pettis from the top of the division in a battle of attrition earlier this year. As far as Mendes is concerned, once again, this is the huge risk you take by stepping up on short notice. It comes with the territory, and if you aren’t in shape for the big fight, perhaps ‘Money’ should’ve thought twice.

Dos Anjos appears to have built a mean trash talking game in 2015, but can he hang in the banter department with McGregor? Also, how about McGregor vs Dos Anjos for the superfight if ‘The Notorious’ tops ‘Scarface’?