LowKickMMA.com
Home UFC News Quote: I Would Crush Brock Lesnar, He Won’t Have Time To Scream 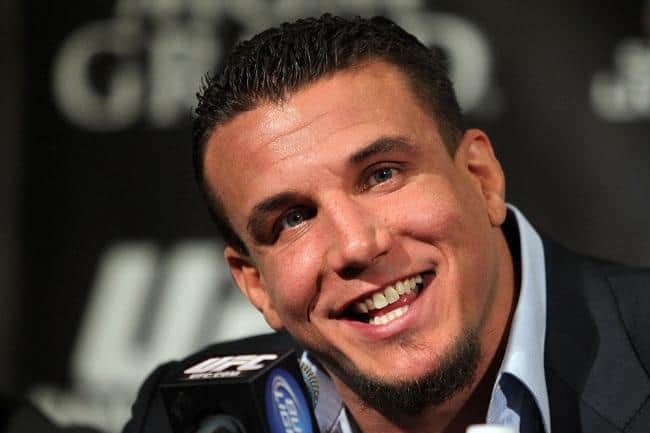 Former UFC heavyweight champion Frank Mir made a career saving move this past weekend (Sunday February 22nd) in Brazil, as he starched Antonio Silva in front of the giant’s home crowd. Just like “Bigfoot”, not many of us picked Mir to come out and win in the striking department, let alone from the orthodox stance.

The Greg Jackson‘s trained heavyweight made a statement. He is back, and with much better stand up skills. Talking with The Fight Corner, Mir continued on the once again hot topic of a trilogy fight with Brock Lesnar:

“I think I would crush him standing up now,” Mir said. “I think that on the ground and stuff, I’ve worked with Ricky Lundell and stuff a lot and learned how to nullify the wrestling. I wrestled three rounds with Daniel Cormier who’s an Olympic level wrestler and he had a difficult time taking me down. I think that Lesnar would really have to throw caution to the wind and really rush through and I don’t think that he’s gotten any better at wanting to take punches.”

Mir submitted Lesnar at UFC 81 in just 90 seconds, but was severely beaten in the rematch at UFC 100 by TKO in round two. The interesting twist in the new saga of a possible trilogy fight, is that Brock Lesnar currently has a contractual dispute with the WWE (World Wrestling Entertainment) boss Vince McMahon. He allegedly cannot get past an ‘impasse’ with the organization regarding his contract which expires on March 30th after Wrestlemania 31. Mir continued:

“I’ve always heard those rumors from his camp that he doesn’t like to get hit and we’ve seen it in the hfights,” Mir continued. “The jab-hook combination that I landed on Bigfoot would have floored him too. And then ground and pound I threw on him, to Bigfoot, I think that the same thing that happened with [Lesnar] and Velasquez – when he finally hit his back, screaming for the fight to be stopped. I just don’t know that he’d have time to scream with me.”

Ouch, don’t hold back hey Frank? Indeed Mir’s stand up arsenal has expanded immensely, and you could also validate his argument with the fact that Lesnar will have been out of practice for a while now. It’s been nearly four years now that Lesnar has been away from fighting, meaning the gap in talent between the WWE star and Mir will have once again widened.

Nice work goading Brock Lesnar in to a UFC return here by Frank Mir, but will it work? If so, we could well see the end to one of the greatest MMA rivalries ever.