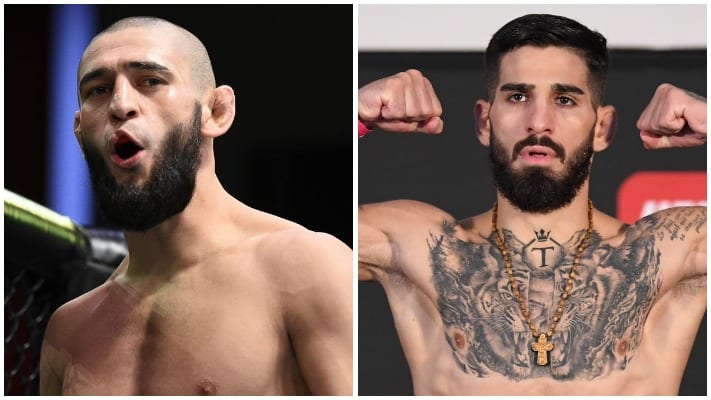 With all the uncertainty in 2020, fighters have been given more opportunities than ever before. Last-minute calls have led to huge upsets and the emergence of MMA stars many didn’t know existed. We asked our writers which prospect has impressed them the most in 2020. Of course, Khamzat Chimaev was the popular answer and he claims the title of LowKickMMA‘s 2020 prospect of the year.

I found this one really tough to pick but ultimately went for Khamzat Chimaev due to his ridiculously fast rise in 2020. In the Octagon he’s looked perfect. His level of opposition hasn’t been the best but that hasn’t been due to a lack of desire for big fights from the Swedish prospect By the end of January he could be ranked in the top five at welterweight in just his second fight at the weight class. It really has been the most incredible year and 2021 will prove if he’s more than just hype.

The obvious pick is Khamzat Chimaev and I agree he’s been sensational this year but as to who impressed me the most for his skillset and how much he has to offer despite being just 23 is the undefeated Illia Topuria. He made his debut in Fight Island against one of the hype trains in UFC Youssef Zalal and was relentless in his submission attempts and you even questioned in some of them how Zalal even got out of them, he ultimately won a dominant decision in the end. In his next fight against Damon Jackson he KO’d him in the first round to show how well he mixes it up. I can’t wait to see how he performs in 2021.

Khamzat Chimaev exploded onto the scene with three stoppage wins in the space of just three months. Fastest turnaround between fights in modern UFC history. In line to matchup with Leon Edwards in January. From relatively unknown to UFC headliner in the space of less than a year.

Really, is there any need for further explanation? Is it really in doubt? Chimaev has made as big of an impact as any fighter in MMA, let alone prospect. He dominated John Phillips in his debut, obliterated Rhys McKee 10 days later, and just Thanosed Gerald Meerschaert in 17 seconds. You could make the argument that he’s not even a prospect anymore, but at 26, with just 3 UFC fights and only 9 in his career, he still technically is. He has his detractors, as any hyped prospect does, but it definitely looks like the sky is the limit. He was already scheduled to face a top-5 welterweight for crying out loud!