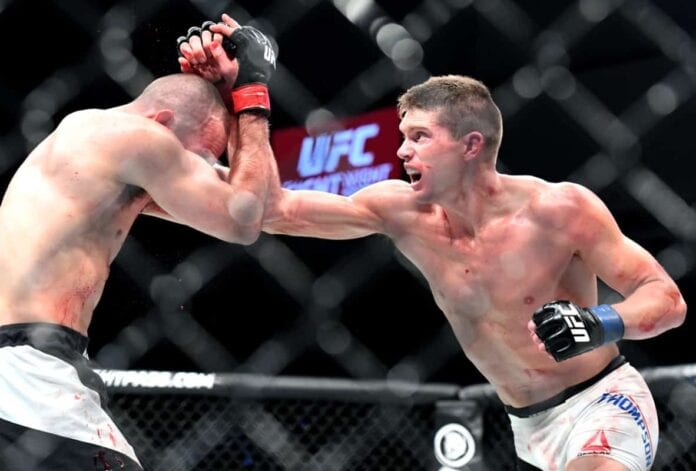 Although it may not have been the era-defining knockout that many were expecting from him, Stephen “Wonderboy” Thompson put on arguably his greatest MMA performance when he thoroughly outclassed longtime contender Rory MacDonald in the main event of last night’s (Sat., June 18, 2016) UFC Fight Night 89 from the TD Place Arena in Ottawa, Ontario, Canada.

Thompson used his peerless striking speed, movement, and angles to pick MacDonald apart with a varied offense of side kicks, hook kicks, and at times, even his vaunted spinning kicks, mixing in a puzzling and punishing boxing game that saw him hit “The Red King” then dart out of harm’s way with surprising ease.

It was cautious at times, yet it was also a dominant victory over the No. 1-ranked welterweight who had nearly ripped the belt from champion Robbie Lawler in his last bout at UFC 189. While questions understandably still remain about MacDonald from that bout, it is also clear that “Wonderboy” has separated himself from the pack at 170 pounds.

“Ruthless” will face Tyron Woodley for the championship in the main event of July 30’s UFC 201 from Atlanta, Georgia, and “Wonderboy” pulled no punches in calling for a fight with the winner at UFC 205 in New York this November. Thompson even said he’d prefer facing the fellow knockout striker Lawler. He should get that fight. If and when he does, are you predicting Thompson will be the next UFC welterweight titleholder?