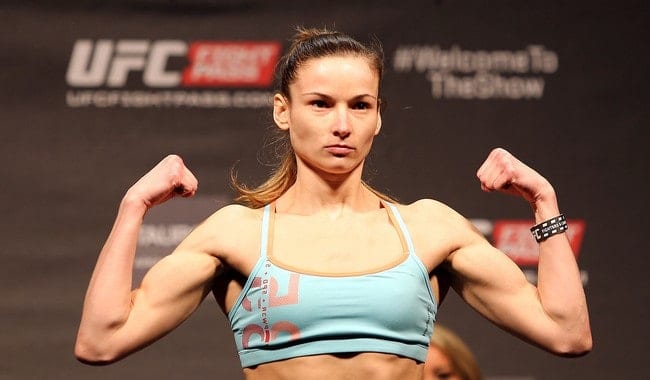 Submitting formerly undefeated Muay Thai champion Joanne Calderwood with an impressive first round armbar, the 23-year-old Moroz kept her own spotless record clean and added a win over a Top 10-ranked opponent in the process.

She also looked strong on the feet against The Ultimate Fighter (TUF) 20 veteran, peppering her with a strong combo to set up her fight-ending submission. Watch her lethal victory right here:

With the win, Moroz undoubtedly establishes herself as a contender in the still-developing UFC women’s strawweight division. She’s the kind of brash personality that will help the division gain notoriety quickly, similar to newly crowned champion Joanna Jedrzejczyk’s unexpected takeover of the media activities leading up to her UFC 185 win over former champion Carla Esparza.

Moroz helped further her cause by calling out Jedrzejczyk in extremely brash fashion at UFC Fight Night 64, and while she’ll probably have to win one or two more fights before she squares off against the champion, she put her name on a short list of actually legitimate contenders to the throne.

The brash young challenger said that she’s already aiming to fight Jedrzejczyk at the post-fight press conference (via MMA Junkie):

Moroz doesn’t seem to care about her lack of UFC experience or the contenders ahead of her; she wants the title shot right away: “I would prefer the next one to be for the championship.”

Rose Namajunas was touted as the next Ronda Rousey during her run to the TUF 20 finals, but with five armbar wins and one TKO in six total mixed martial arts (MMA) bouts, Moroz could be the true embodiment of that lofty praise, at least in some measured degree.

It’s going to be more than extremely difficult to reach anything close to Rousey’s level of dominance and ruthless finishing ability.

Based on her unlikely performance yesterday, do you believe that Moroz will reach the highest levels of the UFC women’s strawweight division? Is she already there?