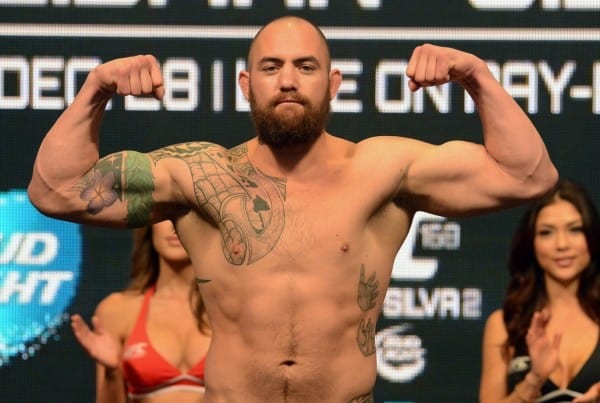 The UFC is currently in a bit of hot water concerning the unfortunate topic of domestic violence in professional sports.

After a drummed-up HBO ‘Real Sports’ documentary about domestic violence in MMA that focused on convicted outliers John ‘War Machine’ Koppenhaver and Jason ‘Mayhem’ Miller, two of the promotion’s employees promptly did themselves and their employer no favor by appearing in the news for two respective instances involving domestic violence.

Light heavyweight Anthony Johnson, who has been convicted for domestic violence and recently saw another case dropped, made a huge scene on social media when he detailed an instance of him berating a female gym member in a Facebook post. The UFC supposedly conducted their own investigation and found that Johnson, who will still fight Jimi Manuwa at this upcoming Saturday’s (Sept. 5, 2015) UFC 191 from Las Vegas, was in the clear.

An anti-domestic violence group in Las Vegas will protest Johnson’s inclusion on the event next weekend, yet that’s not even the biggest issue surround domestic violence and the UFC right now.

That dubious distinction obviously goes to Travis Browne, the heavyweight slugger who is rumored to be dating women’s bantamweight superstar Ronda Rousey. The issue with that is Browne is still married to model Jenna Renee Webb, the alleged victim of some heinous attacks at the hands of ‘Hapa.’

READ MORE:  Demian Maia Recalls The Time He Was Stabbed During A Bar Fight

Again the UFC conducted an internal investigation into Browne’s accusations, once again finding their fighter to be cleared of any wrongdoing when the results came back ‘inconclusive.’

That sparked a public relations nightmare that could be much worse for the promotion after Webb decided she would now press charges on Browne because the UFC had decided not to punish him. It’s already a mess but could get a lot messier, as the promotion may have no choice but to re-suspend Browne if a court of law finds him guilty of the crimes they absolved him of.

Browne is most certainly innocent until proven guilty, but the whole thing is just a terrible look for the UFC, especially after the highly publicized backlash on abuse in other sports and the HBO special, and in truth the promotion just doesn’t need Browne that bad. He’s a middling heavyweight in a currently buzzing division, but the main thing is that he’s making them look bad.

They may plan on booking ‘Hapa’s’ return to action sooner than later; however that could be pushed back substantially if he finds himself caught up in a lengthy court battle. With that said, should the UFC just cut ties with Browne and all the negativity he’s bringing in, or is he worth keeping for some odd reason?